Carrying either a pepper spray or a Mace will increase your personal security. Both of these self defense tools are aerosols which when discharged can cause temporary blindness, pain, respiratory tract congestion, or disorientate the attacker for a short while. But while these two products are similar in many ways, they have some clear differences. By comparing the two, this article will help you understand which one is better for your self defense requirements.

Pepper spray is a product that combines different chemicals like Oleoresin Capsicum (OC). It’s an inflammatory product that’s designed to unarm and incapacitate an assailant for an average of 30 minutes. Once engaged, this product will cause the assailant temporary blindness or blurry vision while restricting their airflow. Even individuals under the influence of drugs or alcohol are still susceptible to these intense sensations.

Mace on the other hand is a brand name for self-defense products just like all copies are usually called Xerox or all noodles Ramen. When inhaled, Mace works by increasing the assailant’s production of tears, causing a temporarily blinding effect.

The traditional mace is an irritant and it’s made of the same chemicals as tear gas (Phenacyl chloride, CN). While in most Mace sprays CN has been replaced with OC (making them pretty much the same as other pepper sprays), Mace Security International still retains a popular “Triple Action” formula combining CN, OC and an ultraviolet marker dye.

Just like First Aid offers immediate medical assistance to an injured person while awaiting the medics or en route to the hospital, Pepper Sprays and the Mace offers immediate response to an assailant to disarm and disorientate them whilst you seek help from law enforcement. Both self-defense products have similar application techniques. They could come in sprays or guns, which once engaged or fired at an assailant from a distance of 4-12ft can induce its effects.

Pepper spray is highly inflammatory and once released and inhaled by an assailant, it immediately induces symptoms like coughing, choking, and difficulty breathing. It will also cause nausea and a burning sensation to the eyes, nose, and throat as well as a corneal abrasion. Swelling of the mucus membranes and the capillaries of the eyes are also a part of the equation as this is what causes the temporary blindness. Pepper spray is so effective that it can still disorientate an individual under the influence. One second of its blast can fully render the assailant vulnerable.

Mace isn’t inflammatory. The earliest version of Mace was an irritant that’s known to cause pain to the eyes, nose, skin, and throat of an assailant, same as tear gas. It also took 5-30 seconds for the effects to kick in, which is a detriment in self defense situations where quickly disabling the attacker is crucial. It’s residue could also last for days, making it more dangerous. However most of the current Mace products are void of the toxic elements found in the original version. 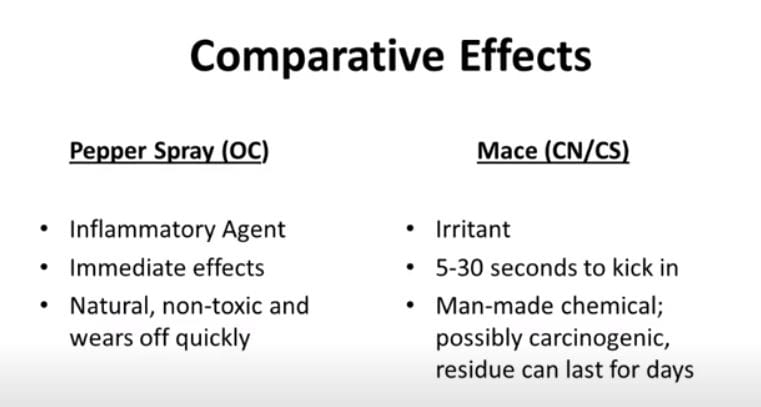 If you’re pondering over the legality of using either pepper spray or a mace on a threatening individual, here’s what you need to know. The use of pepper spray is legal across the 50 American states, however certain states do have their restrictions. (source)

For example, the state of California, the “pepper spray canisters must contain 2.5oz or less”. For Massachusetts, the restriction is on shipping. In this state a pepper spray intended for protection from a human cannot be shipped and those for defense against animals like dogs and bears can be legally shipped.

Michigan’s restrictions have to do with the size of the canisters and the concentration of the chemicals. In this state, the “pepper spray canisters must be less than 35 grams” while the OC concentration has to be 10% or less.

New York’s restrictions are the same as that of Massachusetts and it can only be sold at pharmacies or by firearm dealers, while Wisconsin’s OC concentration has to “be 10% or less” with canisters being less than 60 grams.

For Mace, the restrictions can be more tricky. Since Mace is a brand name for self-defense aerosols, if your aerosol uses the new OC formula, then the same restrictions for Pepper Spray apply. However, for a CN formula, that’s tear gas and it is illegal in some states like Wisconsin, Hawai’i, and Washington D.C. provided it’s the current CN formula and not the original one that’s been banned.

Now, for legal reasons, using a legal, non-lethal product for self-defense makes for a strong legal defense case if you are sued. Hence in the states where Mace isn’t legal, pepper spray is your best option that’ll prevent you from facing the long arm of the law if you end up spraying the wrong person.

These are the laws at the time of publishing the article (March 21st, 2021). If you’re reading this at a distant future, do check if anything’s changed.

Whether you can use a Pepper sprays or a Mace effectively also depends on the environment. On this point, they’re pretty much the same.

To decontaminate the area, open the doors, windows, and other openings in the area for proper ventilation. However, the degree of contamination, as well as the amount of ventilation, will determine the rate at which the situation is defused.

If either self-defense aerosol is discharged in an open or windy area, it can still be problematic. In such an environment, spraying in the direction of the wind isn’t advisable. When dealing with a potential assailant in a windy area, always spray downwind, else, you might be affected instead.

Note: The decontamination of a windy area will be easier than one discharged in an enclosed space.

The price range for Pepper Sprays and Mace differs. The prices are dependent on the spray/discharge range, type (like stream, fogger, gel, or foam) carry method, volume, and extra features like UV dye.

Pepper Sprays could retail from $10-$50 or more, depending on these factors while Mace can retail for $55-$100. However, you can find a good self-defense aerosol for an average price of $30.

Both of these self defense aerosols come in pocket sizes, thus making them lightweight and easy to carry around. As an extra feature for convenience, most pepper sprays and mace can be attached to key chains or wrist bands.

In either aerosol, the users’ safety depends on how easy it is to use or discharge. It also depends on the type of pepper spray or mace. Some sprays have a button while maces could have a trigger. Always check which end the nozzle is and turn it away from you when discharging. Also, most pepper sprays and maces are equipped with a reinforced trigger with a twist-lock safety that secures its content from accidental discharge.

When considering the type of aerosol, a stream aerosol gives you a longer range and allows you to target your attacker better, however, it is harder to get inhaled. A mist aerosol is easier to inhale but its range is shorter, the foam aerosol is more contained and prevents you from hitting an unintended target, however its range is shorter and it’s slower to manifest.

So the type of pepper spray or mace you should get should also be based on your carrying capacity and how you prefer on using it.

According to the TSA, one 4 fl. Oz or 118ml container of mace or pepper spray is permitted aboard the plane, provided it is in the checked baggage and equipped with the appropriate safety mechanism to prevent an accidental discharge.

Now, self-defense sprays that contain more than 2% by mass of tear gas (either CS or CN) are prohibited from a piece of checked baggage and neither pepper spray nor mace is permitted in a carry-on bag. Hence, your best bet for carrying a pepper spray when flying is ensuring it meets the requirements for checked baggage.

In essence, both of these self defense tools are very similar. Mace sprays also come in different shapes and sizes as do pepper sprays. But when buying mace, make sure that you look at the spray formula, and whether it’s main ingredient is CN or OC.

As mentioned, CN is a chemical used in tear gas. OC on the other hand is less harmful but its effects are faster and stronger, so it’s preferable for self defense.