TVs and monitors are expensive and easy to snatch. All it takes is two good hands, and many thieves have at least that much equipment at hand (no pun intended). They’re also easy to resell online on places like Craigslist and other online and underground venues.

If you have a brand new TV or a more expensive monitor laying around, it can easily become a target for theft. Especially if it’s a hotel TV or you’re renting an apartment, either due to the guests’ negligence or bad intentions.

In home settings, the simplest way to prevent TV from being stolen is by locking the room properly. Lock the door and windows every time you’re away. You can further reduce the chances of the room being broken into with additional security devices. I’ll mention the best options later.

But if that’s not possible because the room has to be accessible to others while you’re away, you can do one of the following things:

Having said that, all of these methods will improve TV security at home, business or a rental. Now I’ll share with you the best TV anti theft devices and how to use them properly.

Security cables are used for securing bicycles, motorcycles, patio furniture and many other objects that would otherwise be very easy to snatch. It’s a simple and effective way to prevent a thief from just picking up the TV and carrying it away into the sunset.

Depending on the type of TV or monitor you have, you might not be able to use just any security cable or chain. Mainly due to design of the monitor and stand, which might be too wide or too narrow at some points. There has to be a way to lock the security cable so that it can’t be pulled over easily from either side. So the narrow part of the stand or a hole of some sort needs to be present. Check if your TV has either of these prerequisites.

Many times the most practical solution is a one loop cable which allows you to set the width of the loop to match the TV stand or any other part of the TV. The other side will be locked to another object. The Master Security cable from Amazon is a great choice because it has a loop on one side and a U-lock on the other end. So it can be easily secured to a security anchor on the wall or the floor with the U-lock.

Before deciding on the length of the cable, make sure that there is some super heavy or immovable object you can attach the other end to. A piece of furniture like a couch, a steel bed frame or a fridge can all work well.

If for whatever reason Kryptonite is not your style, the German ABUS hardened steel anchor is another great anchor but a bit larger. It has a 5/8 inch thick shackle and it’s pretty wide. And of course, it also includes the required mounting hardware.

The “anti-theft security kit” title is a bit of an over-stretch. This is simply a security cable with the required mounting hardware.

However, it can go through the small VESA screw holes found on the back of most TVs, which makes it convenient for wall-mounted TVs and others that can’t be secured with a regular security cable. Having said that, this is a really popular security cable used in hotels, churches, offices, retirement homes.. you name it.

I would get this if I was trying to make it harder for potential burglars. More as a deterrent than an actual prevention. Because although the cable is strong, it could be cut through with a large enough tool.

The trick to making it really effective is to position the TV so that the cable is out of view and reach from being cut. Which is why it’s a pretty good choice for wall-mounted TVs. And pretty affordable, under $30 on a discount on Amazon at the moment of writing.

A small device like the Ultra-Thin Doberman security alarm (link to Amazon) can be attached to any part of the TV. You can make it unnoticeable by attaching it on the back.

The backside of the alarm is self-adhesive, so it’s easy to stick on any surface. If the surface vibrates or the object (in this case the TV) gets moved, the alarm will get triggered. It will produce 100+ dB of noise, which is enough to alarm everyone in neighboring rooms and beyond.

It’s a battery-powered alarm so it’s not dependent on electricity. Even if the burglar cuts of the power to deactivate other alarm systems, a basic alarm like Doberman will continue to function and give them a good ol’ surprise.

Also, the alarm can be turned on/off with a flick of the switch located on it’s front side. This is both a good and a bad thing. It’s convenient for you and other users who you trust. But it’s also convenient for the thief. If he sees it in time that is! So it’s important to conceal it. If the TV has to be moved in order for an unaware person to notice the alarm, than it will definitely do its job. 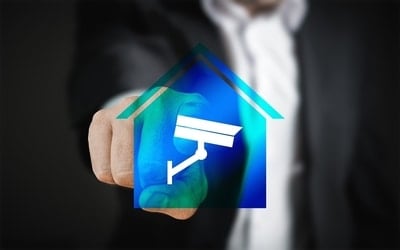 For outdoor use it should be a weatherproof camera that can withstand wind, water and harsh conditions in general. A security camera will obviously increase the security of the whole place, not just of your TV.

AVOID INTRUSION OF PRIVACY: Whether you can legally install an indoor camera or not depends on whether you’re intruding in other people’s privacy or not. It’s usually perfectly okay to use it in your own home, as long as everyone knows about it. But there’s a grey area in terms of legality when it comes to monitoring employees.

On the other hand, it should NOT be used in rentals and hotel rooms. However, any place that is deemed public, such as a library, a hall in a hotel and a retirement community open living room space for example are fine. Outdoor spaces are usually fine as well.

But again, if you’re renting the place out to someone, you should make it clear which areas are monitored to avoid any problems. Use common sense, and contact a legal expert if you’re not entirely sure.

Learn more: Are security cameras an invasion of privacy?

MOTION SENSOR OR NOT: When having a security camera is allowed, it’s an excellent anti-theft measure for TV and any other expensive object prone to theft. For restricted areas, it’s best to use a motions sensor camera. This camera will send you a notification if there’s any movement in the monitored area.

For places where movement is expected, there’s no point in using motion sensor technology. You’d be receiving notifications all the time! In that case set up a simple security camera with good night vision, or one that allows you to turn on/off the motion sensor depending on the situation.

DOME OR BULLET CAMERA: In general, dome cameras are better for small and tight spaces so they’re a more popular choice for indoor areas. They have a wider lens but cover less length. Bullet cameras are the opposite, so they’re better for open and larger areas.

5. Improve the security of doors and windows 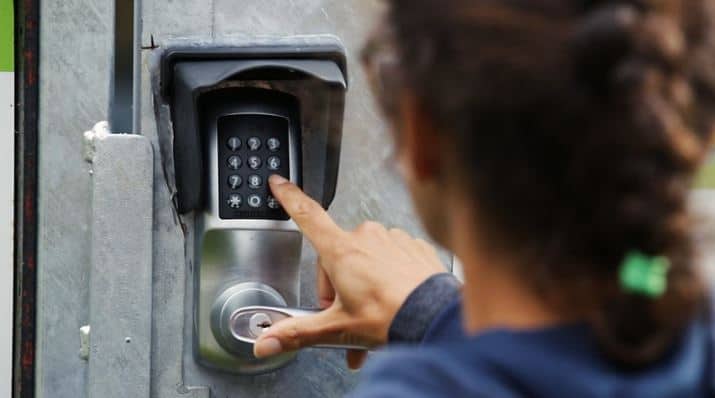 TV theft typically occurs during break-ins. Burglars exploits an open or weak door or window to get in and steal whatever they can carry.

The best way to prevent break-ins and TV theft is by making sure your doors and windows are locked properly and strong enough to withstand forceful entry. A strong deadbolt lock, an extra door/window barricade, glass security film, metal grills and many other devices can be used to secure doors and windows.

You should also pay attention if you have outward, inward or perhaps sliding opening doors and windows. Because some devices work on one and not the other.

To save you some time and effort, I’ve written many posts detailing the best security solutions for different doors and windows. Follow these simple guidelines and you can maximize the security of your property in no time and affordably at that:

If you secure these entrance points, your TV, wallet, heck, even your microwave will thank God Almighty for having such a wise and powerful owner.

Final Word: How to Prevent TV from Being Stolen

First is to make the TV immovable by using a security cable.

The second is to use an alarm device, either an actual alarm or a motion sensor security camera.

The third strategy is to use a security camera primarily as a deterrent and to identify the criminal in case a theft or an attempt does occur.

The final method is to improve the overall security of your property by making sure that the entrance points are locked properly, monitored and able to withstand forceful break-in attempts.

Whether you should implement one, two or all four of these methods will obviously depend on your particular situation. Overall, I’m positive that this breakdown of security methods and products will help you secure your TV more effectively and affordably.