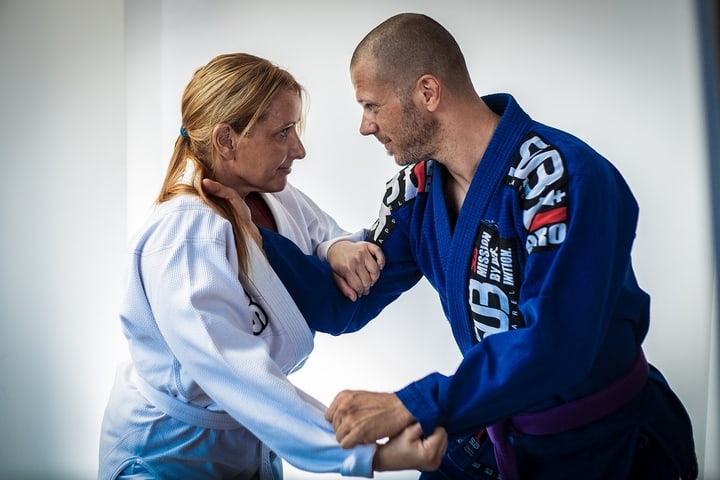 Brazilian Jiu-Jitsu is a martial art that focuses on grappling and ground fighting. Many people believe that it’s not very effective for street fights, but this isn’t true! In this post we will discuss why BJJ is an effective form of self defense in combat situations outside the dojo.

1. Grappling and ground fighting can be very effective

If you fall or manage to get your opponent on the ground, knowing BJJ can make a world of difference. This martial art is primarily based on fighting while on the ground after all. If someone decides to knock you down to the floor and especially if he/she falls down with you, they will be the ones putting themselves unknowingly in a situation where you are at your best.

2. The goal of BJJ is to get your opponent into a position where they are unable to attack you

Let’s imagine a drunk person attacks you on the street. If you’re unable to run, you have to deal with them. But you don’t want to cause too much damage due to legal and moral concerns. It would be best if you could simply put the person to sleep and call the police, without punching their teeth out. If your fighting style revolved around boxing or kickboxing that would unfortunately be the likely outcome. But with BJJ you have many submission methods that will render your opponent incapable of fighting without causing any injuries. This is a significant bonus for self defense.

3. It’s not effective against multiple attackers

If your opponent has friends who are willing to jump in, then you could be overwhelmed by sheer numbers faster than with other fighting styles like boxing or kickboxing. That’s because BJJ doesn’t involve punches and kicks which would allow you to keep opponents at a safe distance while you take them out one by one. In those situations kickboxing is a much better option because it involves faster movement and standing instead of intricate ground movements.

BJJ is all about using leverage against your opponent’s size or strength by utilizing skillful maneuvers such as joint locks and chokeholds. It also teaches proper technique to escape from various chokes, holds, arms locks and other submission techniques so you also get the benefit against skilled opponents, not just those that rely on pure physical dominance. So BJJ is great for smaller people who have to fight larger opponents because it relies on skill rather than muscular power.

5. Boxing vs BJJ in a street fight

Boxing is a more effective option for street fighting because it involves two-handed strikes from the standing position, whereas Brazilian jiu-jitsu relies on grappling and ground techniques.

Boxing would be much better against someone whose skill level you don’t know. BJJ requires knowing your opponent’s strengths and weaknesses so that they can be successfully overcome mainly through the fighting techniques.

Boxing is also a better option against multiple attackers due to standing and faster movements. Furthermore, if you have the option to escape from the fight, standing provides an obvious advantage for doing so.

6. BJJ vs Judo in a street fight

The judo-trained fighter would be the better option for a street fight. The reason is because this fighting style typically relies on throwing techniques to take opponents off balance and onto the ground, where striking power can then be applied from a dominant position either through punches or kicks.

Judo matches are usually scored based on throws, takedowns, and other grappling skills. Again, the standing position is superior to ground if you can maintain it. You’re also less likely to get injured in a street fight in comparison to someone who practices Brazilian jiu-jitsu because your hands will be free to block attacks if the need arises.

7. BJJ vs Muay Thai in a street fight

When comparing BJJ and Muay Thai for street fighting application it ‘s important to consider that both styles rely on takedowns and throws. In BJJ these are typically done in the form of sweeping an opponent’s leg under them or using a trip-throw, while Muay Thai relies more heavily on various kicks and punches.

A common misconception about Brazilian Jiu Jitsu is that it will work when faced with a street fight scenario because opponents are taken off balance before being thrown into submission from top position. However, if this fighting style has any weakness it would be against opponents who are willing to fight back; in a street-fight environment it’s important that you use all of your limbs and keep moving.

In this case, Muay Thai would be more effective because it relies on striking techniques which can result in knockout if properly executed. On the other hand, Brazilian Jiu Jitsu is reliant on joint locks and chokeholds to force submission from an opponent while they’re still conscious – meaning even when applying knee strikes or punches these fighters must do so without fully committing themselves. This makes BJJ less useful against opponents with strong mental resolve who will continue fighting despite being injured and until their body gives out.

8. BJJ vs Wrestling in a street fight

If a BJJ practitioner and a wrestler engaged in a street fight , the wrestler would likely prevail. The BJJ practitioner’s ground fighting is only effective against an opponent who cannot defend themselves while on their back – which any self-respecting street fighter will avoid at all costs. Wrestling, by contrast, relies on throws and takedowns to control opponents in a fight; they’re also able to use those techniques from standing or mounted positions when necessary due to training with both feet planted firmly on the ground.

A wrestler could take down a Brazilian Jiu Jitsu practitioner without much difficulty, relying primarily on throws like the suplex to change position where they can then apply more traditional wrestling moves such as headbutts and elbow strikes before eventually applying a chokehold for submission.

9. BJJ vs MMA in a street fight

It’s important to notice that BJJ techniques are part of MMA. That is to say, grappling and controlling the opponent. But MMA also includes powerful leg kicks, knee strikes, strikes with hands and elbows. So overall MMA is more versatile. But ultimately it’s a mixed bag, since the outcome depends on whether the fight goes to the ground or not, and the overall skill level of the fighters involved.

BJJ provides great skills for fighting on the ground. But most street fights are fought standing. It can be a great supplementary martial art if you do end up on the ground or if you’re fighting a large opponent and need to leverage his size to your advantage. However, it would still be beneficial to develop solid standing attacks and blocks, through boxing, kickboxing or similar martial arts. Hope this helps!

link to Is Krav Maga Effective for Self Defense? Here's What You Need To Know!

In this article I'll share with you some great non-firearm options for protecting yourself on the streets or against home intruders. If you use a home security system or just plain old motion...