Having trained Krav Maga for 2 years (shout out to coach Jason Manny!) I often get asked if Krav Maga is effective for self defense. As you probably know by now, Krav Maga is a fighting system that was developed for the Israeli Defense Force.

In the last couple of decades it became popular worldwide and is practiced by many security forces as well as regular citizens for improved self defense.

While it’s popularly known as the “self defense martial art”, some people are still skeptical about it. What makes Krav Maga different from karate, boxing, BJJ and other martial arts (yes, I consider boxing a martial art as well!) used to kick *ss on the small screen?

This is a completely reasonable question, especially if you want to learn a fighting system, but you’re not completely sure which one to pick. I mean, the Snake Kung Fu looks pretty cool too… but it’s probably not gonna be of much help in a street fight!

Well, I’ve decided to give an objective assessment of Krav Maga in this article so you can judge its value for yourself.

1. Advantages of Krav Maga for Self Defense

Krav Maga is based on a very simple philosophy: end the fight as quickly as you can and save your neck. That’s really the end goal. But how do you end a fight victoriously? Contrary to all the other martial arts that are so focused on fighting fairly, Krav Maga is sort of a Dark Side fighting system. In the sense that you can kick the opponent in the groin, poke his eyes and use your environment to your advantage. 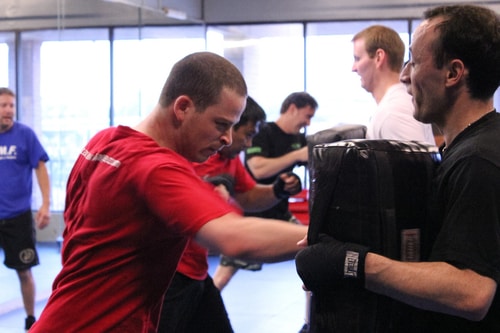 While boxing for example has you focusing on your punching and striking game, it doesn’t teach you how to disable your opponent if he has a weapon. If you find yourself in a dark alleyway being threatened by a thief with a knife, you could potentially use a Krav Maga disarming move to save your life.

You don’t get this type of training with boxing, BJJ or any other martial art which focuses more on fair play between two competitors in a fighting match with set rules, rather than a street fight of any sort.

The second benefit is the use of environment. Krav Maga teaches you how to use objects from your environment to defeat your opponent or escape a situation quickly.

Whether you’re cornered in a bar by a couple of drunk guys, one of who’s sister you accidentally slapped on the butt, or someone wants to rob you on the street, you’ll be more aware of your environment and the objects such as glass bottles, rocks, pipes or even sand that you can throw in the opponents eyes. 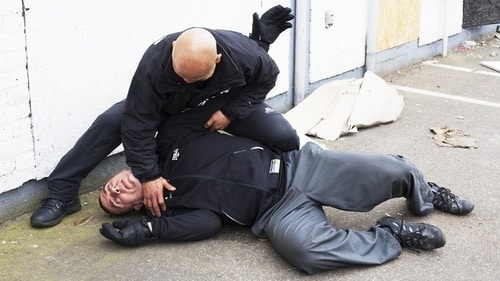 This is especially handy if someone breaks into your home, because you already know the environment pretty well and can use it to your advantage.

This perhaps seems logical, but you’d be surprised at how untrained people react when they face danger. They often lose situational awareness instead of remaining calm and composed. They also become afraid of using any surrounding objects to their advantage because they don’t want to “trigger” the opponent to go harder at them.

This is a weak tactic, because unless you can escape the situation (which is always recommended), you should always make yourself more dangerous. Because by playing the victim you will not stop an opponent who’s already determined to kick your butt.

The third benefit is that Krav Maga combines all the best elements for self defense from other martial arts. So you get elbows from Muay Thai, punching from boxing, grapling from Wresting and BJJ, some Judo techniques etc. For this reason it’s better for self defense than Silat, a martial art with which it’s sometimes compared with.

You basically become a Jack of all Trades in a short period of time. You won’t become a champion in either of those sports by learning Krav Maga, but you’ll have more skills to choose from depending on the situation.

This is why Krav Maga is excellent for self defense even though it doesn’t really come close to the depth of knowledge that some martial arts require for you to be able to fight properly; the focus is placed on the situation, not on any specific technique.

This is also why you can learn to defend yourself pretty well in a couple of months, not years. And without any super-disciplined approach. You just need to follow your coach’s instructions and you’ll be pretty good in a matter of 6-10 weeks. Of course, the longer you train, the better you’ll get, so there’s always room for improvement.

The focus of Krav Maga training is not on being the strongest or having the most endurance. It’s about using the right technique at the right time and escaping when possible to save your life. So it’s really a gender neutral practice, and you don’t have to be in great shape to start.

Having said that, being fit helps. You will definitely lose weight, improve your coordination and gain some muscle by training Krav Maga. I also recommend adding doing some bodyweight exercises and running to get even better results.

Many Krav Maga schools will have you do this training; they will try to create a night club environment by turning off the lights, putting a strob on and playing loud music. Some will go as far as recreating the environment with multiple tables and chairs all around.

You then play a simulation of getting attacked in a night club by one or many attackers and your goal is to escape the situation or prevail in a fight by using various techniques. This is one of the most fun aspects of training by far. Again, this is the sort of stuff Krav Maga teaches you unlike other martial arts.

2. Disadvantages of Krav Maga for Self Defense

Jack of all trades, master of none

This problem with Krav Maga becomes evident when you get in a fight a trained boxer or a BJJ master. For example, you’ll learn how to punch and you’ll learn how to fight on the ground with Krav Maga. But you’ll never be as prolific at punching like a trained boxer, or have the ground game of a trained BJJ artist. So if you get attacked by someone who is advanced at either of these sports, you could theoretically get in trouble. 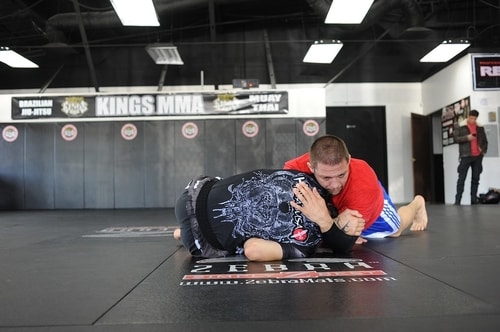 However there is a cure for this problem. First of all, self defense is not like fighting in the ring. If you end up fighting a skilled martial artist on the street or in a night club, your best bet is to learn quickly which fighting style they prefer, and then do the opposite. So if they prefer punching, bring them to the ground, and vice-versa. The only problem is whether you’re skilled and fast enough to make the right decision. This skill will come with time.

And furthermore, even if you train boxing, if you get in a fight with a more experienced boxer, you’ll still be in the same heap of trouble, except you’ll have to rely on sharing punches. Instead of exploiting their poor ground game, which is what you could do with Krav Maga. Unless your attacker knows BJJ, in which case your Krav Maga ground game could be lacking.

On top of that, you also learn how to fight dirty which is crucial in real life, so overall you’re still better off learning Krav Maga for self defense.

So you might have the courage to use flashy moves to disarm your training partner, but the same won’t be necessarily true if a stranger attacks you in a dark alleyway. 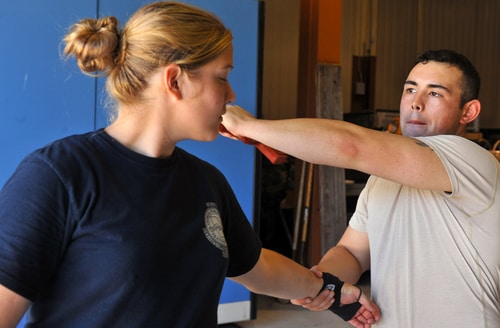 While you will definitely be better equipped to deal with such situations, it’s good to keep in mind that you’ll never be 100% successful on the street as you are in a training sequence. Because all kinds of unpredictable situations may arise, including the unpredictable nature of your opponent.

This is why just knowing the moves is not enough. They have to become second nature, just like in every other fighting system. In other words, if someone plunges a knife at you, you need to respond properly without having to think about it. Because every moment matters when you’re in a fight with a trained opponent.

3. How to train Krav Maga for self defense?

The best way to train Krav Maga is in a good school with an experienced instructor who can go through the motions with you.

A real life instructor will show you the techniques and more importantly will improve your technique by pointing out what you’re doing wrong. Another benefit of training in a real school is being with other people who are also learning, because you’ll be more motivated to develop your skills.

How to learn self defense at home:

You can learn basic Krav Maga and other useful self defense skills at home through a video course.

If you’re interested in this, I recommend the excellent Survival Combat Fitness course by Yuri Boiarsky and John Spencer Ellis.

Check out the slick trailer for their video course:

My friend got this course recently because he wanted to learn the basics before signing up for a Krav Maga class, and he absolutely loved it.

His technique got pretty good after only 2 weeks and he learned over 20 moves, some of which I never learned in my 2 years of training. He’s recently signed up for a class in our local Krav Maga school, and he’s way ahead of other trainees since he already knows most of the moves. So he’s just improving his technique at this point with training partners.

So this course could be a great starting point for a beginner who’s interested in Krav Maga and self defense in general. It could also come in handy for an intermediate, who wants to brush up on his skills at home and learn a couple of new moves as well.