Kitchen fires are a serious safety threat in any household or restaurant. The stats provided by NFPA (National Fire Protection Association) in their Home Cooking Fires report show the seriousness of this issue:

These are worrisome stats. But it’s interesting that a few simple and easily avoidable mistakes led to the majority of these kitchen fires.

So let’s take a look at how you can prevent kitchen fires AND the best course of action to take in case one occurs on your watch.

1. Keep your appliances in good shape

Cooking appliances should be cleaned regularly. They should also be unplugged and serviced at the first sign of trouble.

As far as cleaning goes, the more regular you are the better. Remove crumbs from the toaster, wipe the kitchen counter and any cooking areas where grease and oil stains can accumulate.

Any devices that start producing strange noises should be further examined. Strange noises mean that something is not working right. In the worst case scenario it could overheat while you’re preparing a meal and start a fire.

Microwaves, toasters, coffee and smoothie makers, which most of us have the habit of leaving unattended while they’re preparing our meal or drink can become a real fire hazard.  So until you get the appliance repaired its best to unplug it and refrain from using it. 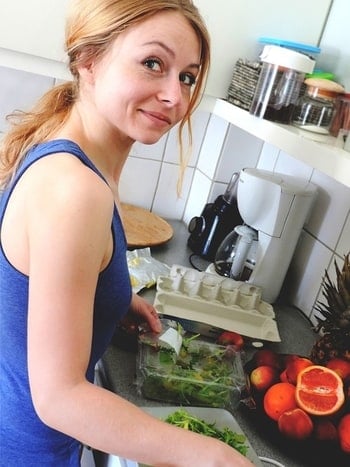 One-third of the people killed by cooking fires were sleeping at the time. More than half of the non-fatal injuries occurred when people tried to control the fire themselves after returning to the kitchen.

It only takes a second for a fire accident to start and less than a minute for it to get too large to contain without professional assistance. Take extra precaution when cooking in grease and at really high temperatures.

I’m well aware that watching eggs boil and waiting for the toaster to pop out some burned bread is not the most exciting thing in the world. But with so many technological gadgets available for entertainment, there’s no reason why you should leave your kitchen while your oven is in full gear for example.

Have a smartphone, TV, radio or laptop at hand for entertainment purposes. And if you have to use the bathroom or pick up the phone in another room, turn off the cooking or have someone replace you in the kitchen until you get back.

According to the NFPA’s report, home fires caused by cooking peaked at Thanksgiving and Christmas. What does that tell us? A lot actually.

First of all, holidays are very stressful because we have to prepare meals for the entire family. It can get overwhelming pretty quickly if we’re not used to cooking for a large group of people.

Secondly, there’s also the additional stress, which can reduce concentration. Along with the inevitable distractions of a house full of people and having other obligations to deal with.

Thirdly, your kitchen is perhaps not adequate for preparing more than one or two meals at the same time.

While you might think that you’re Superman, juggling 5 different recipes can lead to an accident as you forget to take the pork out of the oven or forget to turn the stove burner off.

It’s good to limits. As Nietzsche (and Kanye) says: “What doesn’t kill us makes us stronger”. But just as trying to break your 100 lbs bench press record with 300 lbs is not a smart idea, neither is trying to cook better, stronger and faster all at the same time. You’ll just burn out quickly (pun intended).

It’s also been noted that households that use electric ranges have a higher risk of cooking fires. Usually because people forget to turn them off. Just something to keep in mind.

5. Reduce the risk of clothing ignition

There’s a correlation between fires caused by unattended cooking and clothes being caught on fire. Usually because by the time the person notices the fire, it’s already too big to control and they easily get overwhelmed.

While clothing was the item first ignited in less than 1% of these fires, clothing ignitions led to 15% of the home cooking fire deaths.

As a general rule, always roll up long sleeves and tie back long hair when cooking anything. It’s also common sense from a hygienic perspective.

6. Keep flammable objects away  from the stove

This one hits too close to home. I was wiping the kitchen counter with a paper towel and left the rest of them too near the stove while preparing scrambled eggs.

I got a message on my iPhone and was only away for what seemed like a second before it caught on fire. The flames sore into the air as the range hood was turned off, and I was afraid that the fire would spread further.

I quickly turned off the stove and threw water on the paper towels and managed to get the situation under control. Perhaps it doesn’t seem as exciting now, but it was not pleasant at all from where I was standing.

In a nutshell, keep paper towels, dish towels, pot holders, plastic plates, cups, utensils and similar objects away from the stove in general to prevent such accidents from happening.

7. Get a kitchen fire extinguisher

If a fire can’t be put out by splashing some water you could be in a heap of trouble.

But even if you can splash some water it could be seriously dangerous with all the appliances and heated grease around because it could only increase the flames. It’s much safer and more effective to use a fire extinguisher.

A fire extinguisher lets out carbon dioxide in liquid form. It works by neutralizing oxygen, since oxygen is one of the necessary ingredients for starting and maintaining a fire.

This is also why throwing a blanket on someone’s who’s caught on fire and having them roll on the floor is also effective.

I got this affordable kitchen fire extinguisher from Amazon after my little paper towels accident. It’s smaller and easier to handle than the usual extinguishers found in public places.

Luckily I haven’t had the need to use it yet. But I feel so much safer knowing that I can put out a small-to-medium kitchen fire before it can spread further.

8. Unplug electric appliances when not using them

This goes for toasters, microwaves, juicers, smoothie makers, pancake machine etc. First of all, it saves on the electric bill. Secondly, faulty wiring and overheating thermostats are both fire hazards in waiting.

9. Get a smoke detector alarm

I highly recommend getting a smoke detector for your home kitchen or restaurant.

It’s best not to place it in the kitchen but rather in the next room or a nearby area. The problem with setting it in the kitchen is that it can get triggered by a small amount of smoke from cooking, depending on its sensitivity.

The best rated device is the Smoke and Carbon Dioxide Detector Alarm by Kidde (link to Amazon). This is a battery powered alarm that produces 85 decibels of excruciating noise when it senses elevated amounts of smoke and carbon dioxide. It’s pretty affordable at around $30 at the moment of writing.

Heated metal can produce sparks and start a fire or ruin your microwave.

11. Become an oil and grease minimalist

Hot oil and grease are almost always to blame for kitchen fires. The problem is that so many people use way too much of oil or grease. Not only is this a fire hazard, as it only takes a splatter to start a fire. But it’s also extremely unhealthy.

To be on the safe side, use a non-stick cooking spray. I use an olive oil cooking spray in pans all the time. It’s safe, tidy and reduces those extra calories as well.

Make sure that your stove is clean and up to snuff. Any grease buildup can catch fire from the stove in case of a splatter and if it’s too close to the burner.  I use a natural grease cleaning combo of lemon, vinegar and baking soda to clean my stove on a regular basis:
If you’re not a fan of DIY mixtures, the best commercial alternative is the Simple Green degreaser (link to Amazon). It’s non-toxic, non-flammable, non-abrasive and fully bio-degradable. 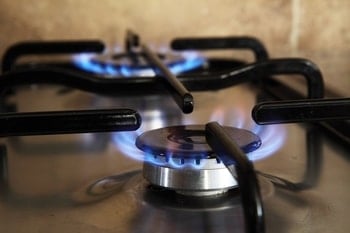 The kitchen area is usually where home fires start. All that grease, gas, heat and electricity can eventually get the best of us to scratch our heads as we look at fire fighters trying to save the last remains of what we used to call home. But more than 90 percent of kitchen fires can be avoided by:

These are the most important tips. Try implementing them to the best of your abilities and you’ll significantly reduce the risk of kitchen fires in your home and workplace. Hope this helps!