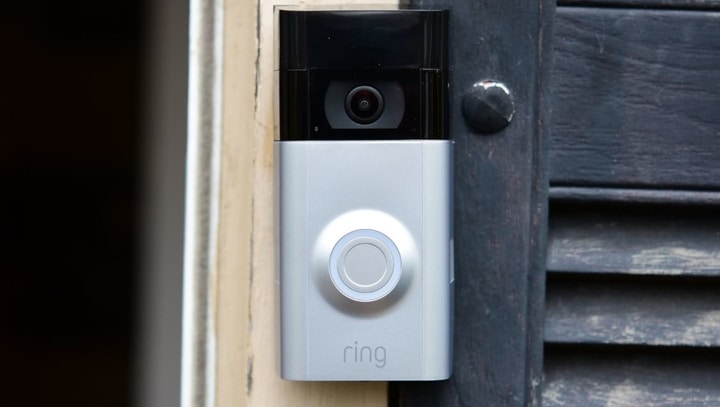 Some people wonder how doorbell cameras work and whether they are recording video all the time.

Many homeowners choose to install a camera on their front entrance because it is an effective way of deterring crime, but many will have questions about just what this entails. For instance, some may ask if these devices record video continuously or only when someone rings the bell? Here’s the short answer:

Most cameras are motion-activated and will only record when they detect movement. However, some can be set to continuously capture footage 24/7, which is known as continuous video recording (CVR).

In this article we’ll go through the 3 main ways that doorbell cameras record footage. We’ll also share information on those doorbell cameras that have the option to continuously record and how that works.

How Does Video Recording Work on Doorbell Cameras?

There are three main ways cameras can be set up to record video.

Note: Not all cameras have all three of these options available.

To capture and record footage, most doorbell cameras need to be triggered by an event. This can be a motion or movement detected by the camera’s built-in motion sensor that triggers recording when it detects something is moving in its field of view.

The vast majority of modern day video doorbells have this type of functionality, which means they are typically paired with a complementary device such as security alarms for additional protection from potential intruders attempting to break into your home unnoticed while you’re at work!

Manufacturers usually prefer to operate the cameras this way because it is more energy-efficient and switches on only when absolutely necessary. The user can always try using live view, which turns on the camera immediately but that video footage isn’t saved.

You can set your camera to only record for a specific time period if you wish, which is great for areas where footage of particular segments are required. When the timer expires and it’s no longer recording activity in that area, the camera will return to its “normal” function until another schedule begins.

Continuous video recording is a mode during which the camera remains always on and continuously records footage, saving it to servers or other storage devices. The good thing with CVR is that you can have one large file containing all of your day’s events. CVR is much harder to bypass than motion-trigger cameras, which can be tricked by using pesky methods like walking around the motion-triggering area.

Doorbell cameras (and a good number of regular security cameras) can’t be set up to record continuously because of the way they were designed. Here’s why:

Doorbell cameras are primarily used for recording when someone rings your doorbell or knocks on it, so there is no need to have them working all day long. Doorbells don’t usually ring constantly and a camera wouldn’t pick anything up in between ringing incidents if it was switched on at that time anyway.

Many homeowners don’t know that the doorbell camera isn’t always recording because it can be a costly endeavor. It is not only expensive to install, but also requires storage space for video files which will eventually drive up costs and frustrations from dealing with a burdened video database system.

Some home security companies try to offer features at low prices by configuring their systems in different ways so they are able store as many videos locally on your own hard drive rather than centrally offsite where charges may apply or tapes could get lost. That way you have unlimited access anytime anywhere without any monthly fees!

Companies may not have enough funds or storage space available to accommodate such high demand over longer periods of time due to these storage restrictions. So they end up limiting what types and volume of footage their customers are allowed access to. This ends up being costly as well because now even more equipment is required from larger vendors who often charge inflated prices.

Doorbell cameras that are battery powered are also not suitable for constant recording because the battery will drain quickly. Security cameras that are meant to record continuously (CVR) are usually hardwired. Furthermore, constant recording can significantly reduce the lifespan of a camera in comparison to those short activation sequences during sound or motion detection.

Nest Hello is the best doorbell camera that supports continuous video recording (CVR) and can remain always on. To make use of CVR capabilities, you need a Nest Aware Plus subscription which will allow your Nest doorbell to record 24/7. With this subscribe you’ll be able to capture everything happening in front of it – as long as there’s no offline or switch off moments!

Nest Hello provides live uninterrupted footage with its all-day motion sensor feature so not only does it provide peace of mind but also has two-way audio for whenever someone rings at the bell.

You can also save up to 10 days of footage on the cloud before it gets deleted. To avoid the hassle of having to constantly charge the internal battery, hardwire your Nest Hello doorbell to an electrical circuit. Other companies such as Vivint offer continuous video recording with their cameras and will only be available if you purchase their Smart Drive which includes a large video storage system.

Vivint’s doorbell camera can also be either hardwired or used with a battery, which means that you do not have to worry about the video becoming unusable if your power goes out.

A UniFi Protect G4 Doorbell is another solution for owners looking to get a doorbell that offers CVR. This video door bell works in much the same way as Vivant’s does and has an NVR (video recorder) where it will store all of your footage without any problems from experiencing blackouts within its system.

Arlo offers CVR for some of their cameras but does not offer continuous video recording (CVR) support for their doorbell camera. At one point, Ring expressed its interest in releasing a CVR option at an additional cost to the Doorbell Camera. However, this has yet happened so we are unsure if they will deliver on that intention or not.

The Ring Doorbell Pro has a small video cache which allows it to record 5 seconds of footage prior to the triggering event. This is not continuous recording, so any time there’s no significant activity in front of the camera that triggers an alert, it will discard all stored footage – this feature ensures your doorbell doesn’t fill up with useless recordings and get clogged up on storage space!

Modern doorbell cameras have many features, including 2-way talk functionality. Some models of camera can record sound with the video recording while others cannot. When you see a product description that includes “2-way talk,” it means that audio is recorded as well and played back through your speaker to listen in on conversations from anywhere via an app or computer connection for up to 150 feet away!

Most doorbell cameras at retail stores like Best Buy, Amazon and Walmart are models which can both record audio and video. When shopping for a camera you will not find “sound recording” or “audio recording” as filters to order results because most of the time they offer 2-way talk with sound/audio recordings.

CVR Doorbell Cameras: Are They Worth It?

Doorbell cameras that can record video footage all the time are a good option if that’s precisely what you want. But you should compare the cost between the doorbell camera with CVR and a security camera. Doorbell cams with this feature usually add it as a bonus which makes them more expensive, whereas security cameras in which it’s an integral component will factor it in the basic cost of the device and service.

Usually, doorbells with a camera attached will have two ways of recording your videos (1) on a cloud server and (2) on whichever device you happen to use locally. Both options work well, but which one is better depends entirely upon what kind of person you are in terms of preferences – do you want everything stored off-site or would they rather keep things at home?

A homeowner who’s looking for a camera that offers continuous video recording should go with a reliable outdoor security system. As explained throughout this article, most doorbell cameras are limited in how long they can record, so those homeowners would need to go ahead and get something more advanced. Hope this helps!