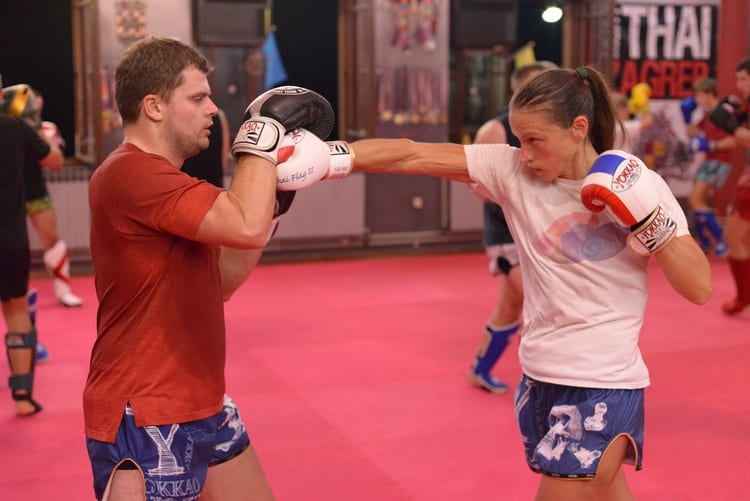 One can say that boxing and kickboxing are alike. Both activities could be siblings from the same parent. However, even with obvious similarities, there are certain differences each activity has over the other, especially in self defense. This review is based on the effectiveness of both fighting styles in self-defense. Hence, in light of this, there are a few areas we’ll be considering.

1. It takes longer to become good at kickboxing

Being a physical skill that most people have to learn and practice consistently before they can engage, both activities have a learning curve. Both boxing and kickboxing require perseverance, commitment, effort, and consistency before one can reap the sweet results of knocking your assailant out. However, in terms of the learning curve (time rate of one’s progress in acquiring a skill or experience), both fighting styles are quite different.

The learning curve for boxing is quite steep as one has to learn a lot in a short period of time in the beginning. Kickboxing has a more shallow learning curve, and it takes longer to become good at it. It typically takes between 4 to 8 months of training to become proficient in boxing. But it requires between 10 to 18 months before being able to use kickboxing for self-defense with good skill and confidence.

This is because kickboxing involves a lot more strategies and techniques which are not embedded in regular boxing, thus its learning curve has a longer progression than boxing. This difference in learning duration is why most individuals believe kickboxing is more difficult to learn than boxing.

Takeaway: When choosing to learn either fighting style, consider the amount of time you’re willing to dedicate to perfect your knowledge and application of the skill. Kickboxing requires more time for one to excel in its use for self-defense while boxing doesn’t.

Both activities will help tone your body and muscles accordingly, hence it doesn’t matter what size or physical abilities a person has in the strength department. As one progresses in training, he/she will gain more strength and resilience while torching some calories as well.

In boxing, strength training is more important in order to deliver powerful punches and to build resilience to receiving them. In comparison, kickboxing requires more flexibility and awareness of the available space in order to execute kicks from a further distance.

Takeaway: While neither size nor strength is a criterion to enroll in either self-defense class, strength training is important, especially in boxing.

3. Boxing is more efficient in close quarters, kickboxing out in the open

Your assailant might use unconventional methods like kicking your groin, biting, hair pulling, etc., when attacking you. To defend and counter, you need to know which fighting style is best in particular scenarios.

Boxing is more efficient in close quarters. When in close contact with your assailant, all you need is one knockout punch to knock out the attacker while you flee to safety. But at the same time, it’s not advised to get too close to a potential attacker as they could be carrying a weapon. With kickboxing, you get a whole range of activities and versatility as you can use your feet, hands, knees, elbows, and other body parts to disarm your opponent. Kickboxing isn’t so efficient in close quarters, but in the open it allows you to keep a distance from the assailant as it takes space to extend your legs in order to throw powerful kicks.

Takeaway: Boxing is more efficient when in close contact with an attacker, while kickboxing is better in the open as it allows you to keep a safe distance.

In boxing, close contact is required to deliver the most powerful punches. Being far away will cause you to lean in, thus making yourself susceptible to counterattacks or in the case of multiple attackers, a total beat down. This fighting style is only limited to the use of hands and the upper body, hence the individual is already limited the number of useful tools.

Boxers are known to deliver powerful punches fast, and hence, it’s quite easier to subdue a single attacker with boxing. When the attackers are in numbers, subduing them with boxing can be more difficult as you are indeed only using two hands as your weapons.

Kickboxing on the other hand offers the individual a greater variety attacks as it involves both the upper and lower body. Defeating multiple attackers is more plausible with kickboxing as you can deliver a powerful punch and a crippling kick simultaneously while maintaining a safe distance to prevent grabbing.

5. Kickboxing is better against armed attackers

Outside the ring, the rules do not apply and your assailant could have a weapon. In such an event which self-defense style should be used? Well, both kickboxing and boxing could work if the attacker possesses a weapon.

In essence, both kickboxing and boxing can be used when there is an introduction of a weapon by an attacker. However,  boxing is the riskier choice as kickboxing initiates a safe distance between you and the attacker.

As long as the weapon isn’t concealed, boxing can enable you to deliver quick and heavy punches on your assailant faster than he/she can stab or shoot you. Hence, you can knock them out. But the trick here is you have to be quick because you will need to get close to them to deliver those punches. A second slower and you’re close enough to get stabbed, hit, or shot.

Kickboxing on the other hand can permit you to disarm your attacker with a swift kick to his/her hand. This will get the weapon out of their grip and on the floor. Next, you can move in for a quick punch to finish them off.

6. Kickboxing is superior if you fall on the ground

So your attacker has you on the ground, which fighting style would get you out of there? The obvious answer is kickboxing. Kickboxing offers a lot of techniques, some of which are applicable from a low point, for example, low kicks.

Also, when on the ground and depending on the angle of the assailant, the only thing you can use is your legs. Hence, all you need to do is to get close enough to your assailant to give them a low kick to their shin, ankles, or knees. This will send them tumbling down as well while you gather yourself up. Since boxing is all about using the hands, getting out of this scenario might prove difficult especially if one has no other martial arts skill.

7. Kickboxing is better when no rules apply

Outside the ring anything can happen as the rules do not apply. Boxing has more rules and restrictions to begin with, since it’s not allowed to “hit below the belt” and you’re training only your swings and punches. A kick to the groin or the knee is often a better way to stop an attacker in situations where rules don’t apply.

Boxing, although very precise and easier to learn, is a riskier option outside the ring and with multiple assailants. Since kickboxing also incorporates the techniques of boxing and kicking, it is a more efficient choice overall.

Self-defense takes away one’s lack of control or vulnerability in harmful situations and equips them with the tools, skills, and materials to be responsible for their safety. Two ways to go with self-defense are kickboxing and boxing. Both fighting styles have their benefits and drawbacks, while one can be better suited for certain scenarios than the other.

This piece has highlighted these scenarios as points in the comparison of both fighting styles and on a final note, it’s important to know that both kickboxing and boxing are highly effective for self-defense. It all boils down to skill and experience.

Continue Reading
link to Is Krav Maga Effective for Self Defense? Here's What You Need To Know!