Only a few weeks ago a worker got seriously injured while working on my house. He got hit by a turning excavator arm. The worker operating the excavator had very little experience under his belt and his colleague came a bit too close.

Luckily the worker got hit on the upper back and he’s a pretty strong dude. Otherwise it would’ve probably killed him. It “only” broke several of his ribs and landed him in the hospital.

This unfortunate event made me interested in the topic of construction site safety. I looked up various articles online and also talked to my father about this. He’s worked as a construction site manager for over 30 years and hasn’t had a single accident under his watch.

Although he had plenty of stories of when workers nearly lost their lives if it weren’t for blind luck. These are the 15 safety tips and precautions for construction sites that have come up as the most important from my research:

1. Watch out for inexperienced workers

Let the less experienced workers build up their skills by operating excavators, cranes and other dangerous machinery by doing work away from others first.

For example, digging a hole while there’s no one around and filling it up again is the best way to learn how to operate an excavator. Use the same educational tactic for other machines until the person develops decent skills and spacial awareness.

Construction work can become dangerous if the site operative doesn’t provide clear instructions to his workers. Imagine a scenario where a bunch of workers are fixing a roof while others aren’t aware of this. Another worker could be moving around carelessly and have a bucket or an AC conditioner drop on his head.

Such a stupidly occurring event can be devastating, and it’s usually the easily avoidable lack of awareness that leads to such accidents. Each person on the site should know what their objectives are, what others are doing and what he/she should be doing. Otherwise chaos ensues and people walk around mindlessly with things falling on their heads.

As a construction site operative or a regular worker, it’s important that everyone knows the main objective of the job at hand and that the work involved is delegated at the beginning of the day with everyone present at the meeting to hear about it.

If someone isn’t present, they should be made fully aware of the situation when they arrive, along with letting others (at least in passing) of what that person will be doing.

Naturally, this isn’t always a realistic proposal on a large construction site. In that case, be aware of how many safety zones there are on the site. This will mean that the work of one group is separate from the work of another group.

If they don’t intermingle, it makes it easier to explain the safety precautions to one group of workers that is important to them and making sure that they don’t go to the safety zones of the site that have a different objective.

3. Keep a close tab on faulty machinery and tools 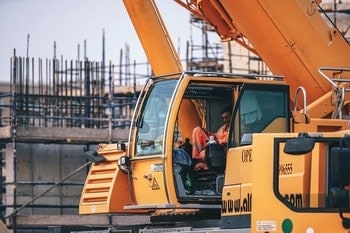 A story from my father will serve as an example of why this is important:

They had an excavator on the site and the arm got completely out of whack. If someone touched the controls in the excavator, it would fall in full speed, and it couldn’t be controlled.

They had this old guy who operated excavators all his life. Despite of being told of the malfunction he got in and started picking on the controls for whatever reason.

Now, this old dude was obviously determined not to listen to reason. But if there is any malfunctioning machinery, it’s important to make everyone aware of its faults in order to minimize the risks as much as possible.

It could be a faulty ladder, a drill or whatever. I’m not going to say you should replace the tool or not use it entirely. Because in some situations it might only be a minor issue that can be fixed eventually, but in the meanwhile the tool is usable as long as the person is aware of the fault.

But regardless of the state of the tool, make sure that everyone operating it or working near it is aware of the malfunction first and knows how to avoid it.

4. Climb on and off equipment safely

Climbing on and off different objects is where most construction site accidents happen. One of the main reasons is slipping due to muddy boots, so make sure to clean any mud or slippery material from the bottoms before climbing.

Some workers will also tend to jump from a machine instead of climbing down in a safe way, especially younger workers. This is also a very common reason for injury.

Wearing gloves is also recommended because it can help in ensuring a decent grip, although the necessity of gloves will depend on the situation. Having a three-point stance, in other words not having to stretch too much to reach a handle is also important.

Lastly, no one climbing up or down in a difficult situation should be carrying anything. Perhaps in a backpack, but not if heavy equipment is involved.

5. Use a high quality adjustable ladder 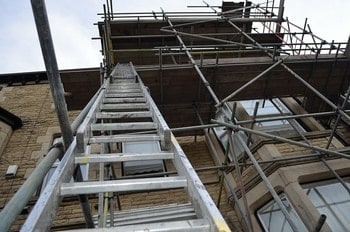 The length of the ladder is very important in preventing accidents. If a worker has to stretch beyond a certain point to reach an object or climb off the ladder they can tip over or fall.

A ladder that’s too tall can also be dangerous because it’s not placed properly on an object or it simply takes away too much space.

A ladder should also have a fully functioning locking mechanism, so that it stays firmly in place and doesn’t extend or retract by accident.

I’ve been using this telescoping ladder from Amazon at home and it’s pretty great because it easily extends or retracts but the locking mechanism is also well designed.

Seinfeld has a great line about men just loving to watch other men work. This is especially true at construction sites, where workers typically gather around and watch as someone is getting the job done.

Unfortunately, the machinery can go berserk or the working handling it can lose concentration for a moment. To avoid accidents you can still be an observer, but maintain a safe distance.

Minor or serious accidents can happen at any time, and it can be very helpful to have the right medication at hand to help straight away instead of having to wait for a doctor for basic help. Having bandages, a disinfectant for cuts and wounds, painkillers… these should be part of your first aid kit.

I suggesting getting a waterproof first aid bag (link to Amazon) and filling it up with basic medication and other necessary stuff for helping an injured person.

You probably already have one of these in your vehicle. But it’s best to use a different one instead of sharing it for both situations and then not having the necessary medicine in case of a car accident.

8. Be weary of fall hazards

If there are workers on the upper floors, make sure to place warning signs so that people can safely avoid any falling objects. Warning signs should also be placed on these upper areas if there’s an increased risk of falling down.

Other than warning signs, other safety measures should be taken,  such as guardrails, safety nets, safety cords, and personal fall arrest systems, depending on the nature of the job.

As far as personal fall arrest systems, I do know a bit about them. I’ve had experience using the Guardian Fall Protection gear for doing home improvement projects. It’s got a 50-foot vertical lifeline assembly and HUV, and I’ve found it to be quite comfortable.

9. Always plug tools out of the outlet

Never plug tools by the cord, by simply yanking it. It can be tempting after a long day to do this instead of walking to the power outlet. While I agree that it may be convenient in the moment, it can also damage the tool over time.

The cord can also be pulled over liquids which combined with electricity at a later time can cause a major accident. Yanking the cord is simply not worth the risk.

10. Reduce or ban the use intoxicating substances 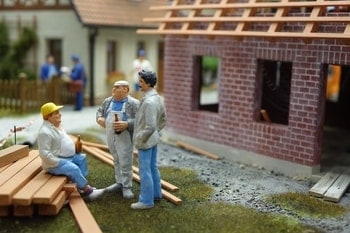 No worker should be on a construction site drunk or under the influence of drugs. And yet this is almost a common occurrence due to the difficult nature of the job.

Construction workers get tired and simply need to relax more than an office worker. Over time the stressful nature of the job can lead to the abuse of various substances, usually alcohol.

But with so many dangers of injury or even death present on a construction site, this is a huge risk for the person and everyone around. A beer or two has rarely hurt anyone, but it’s best to avoid working with drunkards on any project, especially ones that involve climbing or operating heavy machinery.

Some workers have a reputation for being drunkards but they have so much experience in construction that people let it slide. But these are the types that are really an accident waiting to happen because their experience gives them a false sense of safety, which allows them to pay even less attention to the job at hand. Stick to sober colleagues even if they have less experience and you’ll generally be much safer.

Construction is a difficult job by it’s very nature. Even with all safety precautions there’s no 100% guarantee that you’ll manage to avoid all accidents.

But you can drastically minimize them or their impact in case they happen. In other words, it’s impossible to prevent a worker from falling off of a building entirely. For example, with a safety net and personal fall arrest system in place a serious tragedy can be avoided.

It’s important to use common sense and not fool around. Workers with experience are the ones that usually take things for granted because they feel like their superior skill levels can save them from any harm. The less experienced workers are usually more cautious, but they lack in skill levels necessary to operate heavier machinery and deal with more complex situations.

It’s important to delegate work to the right workers for the job. In addition to using the 10 safety rules explained in this article, you’ll be able to drastically reduce the likelihood of construction site accidents happening and the impact of any dangers that are unavoidable. Hope this helps!