Are you worried for your child’s safety at school? There are multiple dangerous scenarios that can occur on the way to school or within a school environment. The most serious dangers include:

Out of these 7 broad categories, unintentional injuries are the most common danger that children face in a school environment. But we’ll address each of these potential dangers in the following safety tips so that your child can be safer and better prepared in any situation: 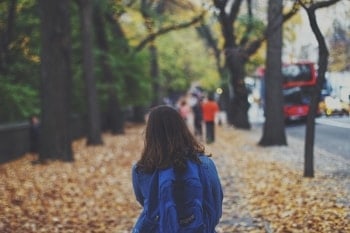 Whether your child is travelling to school on foot, with a bicycle or a bus, you can maximize the safety of the route leading to their destination by taking multiple safety factors into consideration.

Naturally, you can’t decide the path taken by a school bus, but make sure that at least the route to the bus stop is the safest one available. Such a route has the fewest amount of street crossings, intersections with crossing guards, and the least amount of traffic.

However, it also depends on the safety of the neighborhood. Walking through smaller, more isolated streets can be more dangerous if a neighborhood is known for higher crime rates. Take all of these factors into consideration when planning a walking route for your child.

Furthermore, make sure that your child is comfortable with taking the path, both in terms of its duration and any other factors that may make him/her feel uncomfortable. Thinking that your child is taking one safe route but is actually using a more dangerous one without telling you can lead to unnecessary problems and confusion in case something happens.

2. Teach your child how to deal with strangers, especially “authority figures”

“My parents told me not to talk to strangers” should be something that every child can say in case a stranger stops them on the street. Some of the greatest dangers on a school route involve predators. Which is why most schools in the US will call the parents almost immediately if a student doesn’t appear for class. The worry is always that a kidnapping or a physical accident happened on the way to school.

Children get kidnapped mostly because they believe whatever the stranger is telling them. A kidnapper will present himself either as a regular, friendly citizen asking for help or offering a gift, or even worse, as an authority figure.

Getting a police uniform for example is easier than ever since they’re a popular Halloween costumes. It’s especially prudent to remind your child not to blindly follow even those in police uniforms.

If something happens, your child should give you a call first unless the situation requires a quicker response. When a child calls you, make sure that they ask the officer his name and badge number. You can then check if it fits the profile or not before allowing your child to be led by the stranger anywhere or respond to any questions.

Children should generally avoid walking through vacant parks, building complexes, isolated playgrounds and other areas on the route to school. Even if it means getting to school or a bus stop more quickly, it’s simply not worth the risk.

Make sure that your child knows traffic signs and regulations that are common on the school route and beyond it. Also prepare them for unexpected situations such as how to behave in case of a car accident, what to do if an ambulance is speeding to an emergency site and different routes that are available in case a road typically used on a school route is closed down.

If you can, walk your child to school. Or have a sibling do it instead. If not, see if a reliable student living in the neighborhood would like to do it.

6. Don’t let your children wait too long in front of the school

Whether you’re driving your kid to school or picking them up, make sure that it’s within a reasonable time frame. If your child stays too long waiting for the school to open or when it’s closed and getting dark, they could wander off or get tricked by a predator.

7. Bike helmet and other safety accessories 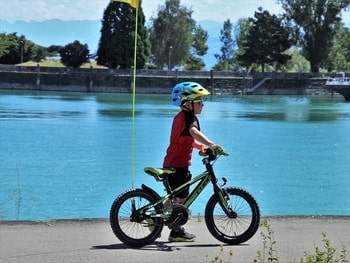 A bike helmet massively reduces the risk of head injury, by up to 85 percent. If your child drives a bicycle to school, have him/her wear a bike helmet and be serious about it.

Many kids don’t like to wear helmets so you need to stress the importance of wearing one to them. Also make sure that the helmet meets the official safety standards such as U.S. CPSC.

I got my kid the Schwinn Microshell Helmet (link to Amazon) and he doesn’t mind because it looks pretty cool. You need to present the helmet as something cool along with mentioning the safety benefits otherwise kids, as many adults, will rather take their chances.

If your child rides a scooter to school, it would also be beneficial to include kneepads and elbowpads. Having said that, a child under 12 should not be allowed to ride motorized scooters even by recommendations from Consumer Product Safety Commission.

8. Teach your child how to enter the bus safely and behave in a bus

If your kid isn’t used to buses already, keep in mind that it’s a whole new experience. You should provide him with a few safety tips so that it doesn’t surprise him.

Running across the street to catch a bus can spell disaster. Sometimes the bus driver doesn’t see the pedestrians running or a car from the other direction catches them by accident.

It’s important to teach your child to arrive at least a few minutes earlier to the bus stop and to wait until the bus completely stops before approaching it. Never get in front of the bus when it’s moving. Let alone stand there, especially while bent, whether tying shoelaces or picking an object from the floor.

Once in the bus, remind your kid to stay seated at all times and to keep their heads and arms inside the bus. Just like when approaching the bus, when exiting one should wait until it completely stops and use the handrail to prevent a fall.

Here’s a great school bus safety video that you can show to your kid:

Make sure that your child has a mobile phone with him at all times. This will help in case you have an emergency and will be late to pick him up, or if he needs your help or to contact the authorities. Have 911 on quick dial along with your phone number, the number of a caretaker and the school’s number.

10. Deal with bullies the right way

Bullying happens in every school to a larger or lesser degree. Unfortunately this is a detrimental type of human behavior which we haven’t been able to eradicate completely. If someone bullies your child, your child should be confident in telling you and the teacher about it.

You should contact the school authorities and set up a meeting to resolve the issue. Confronting the other child or their parents is a strategy that can make you seem like the bully so it’s best to deal with it through an official channel.

Having said that, bullying is often low grade but persistent. There isn’t too much to point a finger at, but it’s constant. So it can definitely be harmful to a child’s development without any immediate physical or mental scars. In that case, a child will often not confide in an authority figure, as it’s “not THAT big of a deal”. To prevent low-grade bullying, teach your child basic psychological and physical self defense.

The best way to learn overall self defense is through martial arts. Martial arts training is amazing for building self confidence. There’s an element of self-discipline, progression and actual ability to defend against attacks that improves the mental well being of individuals, children included. Have your child join a karate class and bullies will avoid confronting him altogether.

Not all school are made equal. Just like neighborhoods, some schools also have a bad reputation when it comes to violence, bullying and other incidents. I highly recommend you do some research on the school you wish to send your child to.

Sometimes the closest school in the area is simply not worth the low level of education and other opportunities provided. Private schools often provide greater quality of education and security on the premise.

If you’re worried about your child’s safety in school, keep in mind that you’re a client, not a prisoner of the school system. If none of the schools are safe enough according to your personal standards, home schooling might also be an option for your family. Especially if you’re a stay at home parent or can afford to hire a teacher.

As a parent, I know how easy it is to become paranoid about my child’s safety. But sometimes paranoia is well justified. The school system has failed more than once. School shootings, bullying and traffic incidents leave many children and parents in tears every year.

In the US, the problem is not getting better, it’s getting worse, as our infrastructure crumbles and the teachers’ wages are at a critically low level. So much so that some are working at Walmart along with their school obligations to make ends meet.

In such a chaotic situation it’s important that we teach our kids about safety precautions, and help as much as we can to prevent tragic scenarios. I’m confident that by implementing these 12 safety tips your child will be much safer and you will be less stressed as a parent.