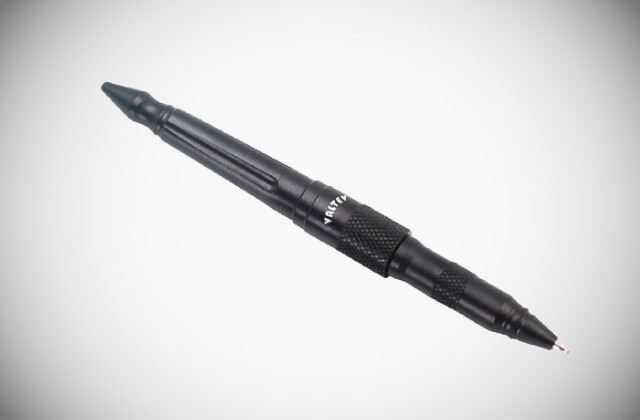 Tactical pens are becoming more popular as an easy-to-carry and relatively affordable self defense tool. But in case you get jumped by a bad guy or gal, a tactical pen won’t help all that much if you don’t know how to use it properly. So here are 5 ways that a tactical pen can be effective for self defense:

The reason why a tactical pen like Smith & Wesson is more effective than a kubaton or a regular pen is because it combines the best aspects of both.

First of all it has a relatively sharp, pointy end. It’s not as sharp as a knife but it’s still sharp enough to do some serious damage, even pierce through the skin. On top of that, it has the weight of a kubaton, which means that each strike delivers a lot of power.

You can check this demonstration for the power of a properly placed stab:

The neck, face, groin (if you happen to find yourself on the ground), and even parts of the arm can all be great targets for a tactical pen strike.

2. Throw the pen at the enemy

If someone with clearly bad intentions is approaching you and you still have time to escape without getting into a physical altercation, you can use the tactical pen as a heavy throwing object to get a few valuable seconds.. or more. Check out in this video from 9:00 forward the damage caused by a tactical pen thrown at a person’s back:

Pretty wild! Obviously, the damage would be even more significant if the pen was thrown with greater force, especially if it hit the head. It could probably render the enemy unconscious.

3. Use a tactical pen and flashlight combo

If your opponent is a skilled fighter and you lack the fighting skills, you will have a hard time reaching his neck or face with a tactical pen. However, if you use both a tactical pen and a flashlight it will make your job A LOT easier.

Here’s how this tactic works: The flashlight is used to blind the opponent by the ultra-bright light. Keep the light pointed in his eyes so he loses sense of direction and isn’t able to spot you. Holding the tactical pen in your striking hand you can do a ton of damage.

I haven’t been able to find any good video demonstration of this tactic. But this video shows how to fight with a tactical flashlight in one hand while striking the opponent with the other. You can simply imagine that you are holding a tactical pen in that striking hand and it would be very similar:

This fourth tip is simply to remind you that tactical pen can be carried pretty much anywhere, even on a plane if it has a simple appearance. The Smith & Wesson Tactical Pen (Amazon link) is very popular for that reason, along with its proven quality and holding comfort.

A pepper spray, kubaton, baton, stun gun are all solid non-lethal weapons but at a security checkpoint you are likely to be relieved of any such obvious weapons.

A tactical pen looks (and can be used) as a regular pen so there’s a much greater chance you will be allowed to keep hold of it. Since it is a slim and small object, keep it in a front pocket or attached to your belt so you’re able to reach fast for it.

5. Keep in hand while walking at night

It would look weird and awkward if you were to play around with a stun gun while walking down the street. But playing around with a pen? Not so much.. barely anyone knows the difference between a tactical and regular pen.

When moving through a very dark area where you could get jumped from a corner, hold the pen in your clenched fist with thumb pressing at the back of the pen. This way you can land a hammer fist at your opponent or perform a stabbing motion immediately.

Final Word: How to Use a Tactical Pen

A tactical pen is a compromise between having no striking self-defense weapon and having an often lethal weapon such as a knife.

While even a tactical pen can also be lethal, you’re more likely to cause some repairable damage to the attacker instead and dissuade them from pursuing you further.

Having said that, it’s advised to inform yourself about the self-defense laws in your area because they can vary greatly from one place to the next.