A catalytic converter is that round canister that connects two pieces of piping in the exhaust. Don’t confuse it with a muffler though (this picture shows the difference).

You’ve probably noticed that catalytic converters are being targeted by thieves more and more. Perhaps you’ve felt this on your own skin as your converter got stolen recently.

There are two major reasons why catalytic converters are attractive targets of theft:

They contain plenty of platinum, rhodium and palladium. Many have noticed a correlation between the frequency of converter theft with the increase of the prices of these materials.

Platinum is particularly expensive, so the converters are easily sold to scrap yards for $150 to $200 a piece. On the other hand, a brand new catalytic converter can cost up to $2000.

If you’ve tried driving without one, you’ll notice that your car will run poorly because of the gap in the exhaust system. It’s also illegal in the first place.

So someone snatching your converter will maybe earn him $200 but it can create $2000 in damages to you, the owner. All the more reason to read up on our security measures to prevent this from happening.

Catalytic converters are easy to remove if they’re not secured with additional locks. All the thief needs is a saw and sometimes a sliding board or a jack to get under the vehicle.

Taller vehicles like SUVs and trucks are more vulnerable because it’s easier to get under them. Once he’s under it, the thief will use a saw to cut through the piping on both sides of the converter and pull it off.

How to know if your catalytic converter is stolen 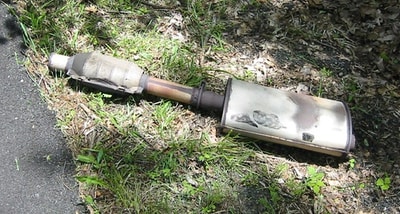 There are multiple giveaway signs:

Get it checked out by a professional to solve the problem. It may require fixing or full replacement, depending on the severity of the damage.Alternatively, you can follow the the tips from this video to examine it by yourself for blockage and other problems.

Luckily there are many ways to protect your catalytic converter and your vehicle in general from criminals:

Keep your car in the garage if you have one available, and keep the door closed when you’re not there. However, keep in mind that this isn’t a full solution because garage doors can be very vulnerable to break ins.

Sometimes they don’t close properly, or they can be susceptible to the “fishing method”; the door is opened slightly on top and then a cloth hanger is used to manipulate the opener.

Not all garage doors and openers are vulnerable to this trick, but some are, so check out our garage door security guide to learn more.

2. Be extra careful when parking outside

Thieves prefer to work in dark areas because there’s a reduced risk of being noticed. Therefore try to park in well-lit areas if you’re parking on your driveway or in public.

Home security cameras are also very useful for keeping an eye on your vehicles. Especially wireless cams that have motion sensors and night vision like this very popular and affordable Zmodo camera from Amazon.

Also try to avoid parking in corners and desolate areas in general. Park in the center of the parking lot rather than a far away corner. Also look for areas with increased pedestrian traffic.

3. Use a converter lock

There’s only one good converter lock that I know of on the market, and that’s the CatClamp (available on Amazon). It’s made from 100% stainless steel construction and fits all gasoline vehicles up to 3″ exhaust pipe.

It requires assembly. It’s easy enough to install that any muffler shop can do it, and the manufacturer will even walk the installer through the process on phone if necessary.
I suggest checking out the customer reviews if it sounds interesting to you, as it’s helped some people secure their catalytic converter after suffering theft with previous ones.

4. Weld the converter to the car frame

Some people have suggested this, but I’m not to sure about it. Welding any part of the exhaust system to the car frame will probably result in loud rattling noise.
Talk to a professional about this to see if it’s a viable option or not. Because even though it’s a great security solution it could cause other unwanted problems.

These are more deterrents because dealing with them would require time and create noise. If you want full security get the CatClamp device or take a chance by welding the converter to the car frame.

Get an alarm that reacts to vibrations and hide it near the converter. This affordable vibration alarm is a good option because it’s easy to stick on any surface and it’s loud enough, producing 113 dB of noise when triggered.
If someone tries to do any “work” on your vehicle, it will set of the alarm. Sawing a converter will definitely produce enough vibrations to get it riled up.
Many car alarms for example will get triggered only by serious break-in attempts or hits. If you have an alarm system in place already, see if it can be set up to detect vibrations and get triggered by them as well.

7. Engrave your VIN number onto your catalytic converter

This will make it easier to identify your converter in the case it gets stolen and someone is able to find it. Furthermore, if a thief sees the engraving, they might opt to steal from a different vehicle to avoid the additional risk. 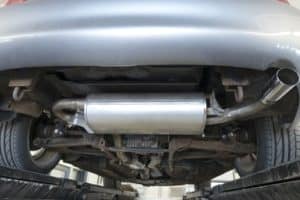 If you’ve had your converter stolen before, you know how much hassle and money it can take to replace it. If the oxygen sensor or a pipe was cut in the process as well, it can be even more expensive than the usual $1000-$2000.

The best way to prevent this from happening is to be smart when it comes to parking, to use deterrents like an alarm and welding something like an ID plate on the converter or engraving information that could incriminate the thief.

But keep in mind that these are all half-measures, since many people have gotten their catalytic converter stolen even when they parked on a busy street with pedestrians moving about all the time.

The risk is reduced, but most people are probably taken by surprise and don’t react to the thief, thinking that it’s just the owner fixing something on the car.

So if you want to FULLY secure your catalytic converter I suggest using the Cat Clamp, which is the only locking device that properly addresses this problem. Hope this helps!