Car batteries are often the target of petty thieves because stealing them is super easy. Just open the hood and its there, ripe for the picking!

They’re also expensive enough to be worth the risk, typically between $100-$300, but it can cost more depending on the car. On top of that, they can easily be stolen to a recycling yard or on the black market.

Usually people don’t inquire about ways to secure a car battery until theft has already happened. The tricky thing is that if a thief has already stolen your car battery, they will know that you now have a brand new battery! Repeat thefts of car batteries are incredibly common, so taking some security measures is advised.

While it’s pretty difficult to completely secure a car battery that’s positioned under the hood, you can definitely protect it better. A car battery thief will typically swoop the parking lot for easier targets, avoiding those cars that are secured in any special way.

Since 99% of cars aren’t secured in any way (many even keep their doors unlocked at night!), you can deter a thief with a minimum of effort. Here are the best methods you can use:

1. Park smart and use a security camera

If you have a private garage available, parking inside is definitely the safest option out of the bunch. If you’re parking in front of your house, install an outdoor home security camera so that you can monitor your car. If you install a camera with WiFi connectivity and is motion sensitive, you will get an alert on your phone or computer if anyone approaches your house and vehicle.

To receive the alert, you have to take into consideration the available distance for the motion sensor on the camera, and park within that distance. This popular SV3C camera provides up to 193 ft night vision and motion detection alerts via email. This is definitely a great idea because not only will you capture footage of the thief, you’ll also be able to respond quickly and see where the thief is, if he has a weapon, if there’s one or more of them etc.

Motion sensor floodlights can also be helpful if you’re parking close to your home. Install floodlights that light up the area when someone approaches. This will deter thieves because they’ll be worried about being seen by someone while stealing the battery.

2. Use a baby monitor

This is a super affordable trick that someone shared on a car forum. Basically, a baby monitor has two parts. The monitor and the receiver. You place the monitor in your car or under it. If someone starts messing with your car you will hear it on the receiver and will have the chance to respond by calling the police or catching the thief on your own.

You don’t have to worry about extension cords and plugging it in either. There are many cheap baby monitors that can run for days on a pair of batteries. This battery-powered baby monitor from Amazon offers up to 1000 feet of range. It’s under $25 and has over 3000 customer reviews, so I suggest checking it out if you prefer this method.

3. Place an alarm under the hood

Stick a simple alarm under the hood. If anyone touches the hood the alarm will go off. I use the Doberman alarm for my front door. It’s really convenient and you can turn it on/off by flicking the switch. But by the time the thief realizes where the alarm is they’ll likely run away from the scene especially if you park next to your house or building. You can buy one Doberman alarm or a pack of two or four.

I recommend getting two Dobermans and placing one on each side of the hood (obviously from the inside), so that even if the thief finds the first alarm and turns it off quickly, the second one will still be on for long enough to alert you or other people who happen to be nearby.

Two of these simple but effective alarms cost less than $15 on Amazon so it’s a really good deal. There’s no installation required. It has a self-adhesive side, so you just stick it on any surface you want to protect and you’re good to go.

This stuff was done a lot during the 70s and 80s especially by people who owned luxury cars. Back then, car radios were getting stolen left and right, and writing a sign “CAR RADIO REMOVED” was an easy way to reduce the chances of a break-in.

You could make a simple “car battery removed” sign with a large paper and pen or print it so that it looks more professional. Then place it on your windshield when you park, especially at nighttime. Make sure that it’s clearly visible.

5. Set up a neighborhood watch 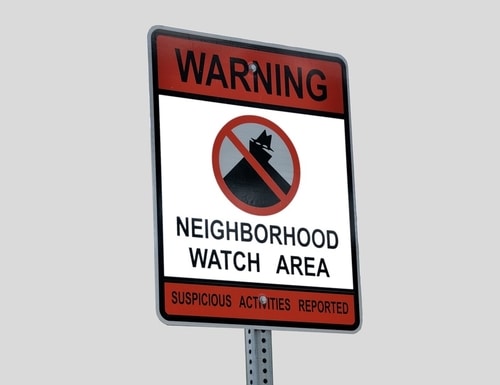 If car battery theft has become a serious problem in your neighborhood, setting up a neighborhood patrol could fix the problem.

Talk to your neighbors about the problem, and set up patrol shifts so that a different group patrols the neighborhood every night.

Even if your neighbors don’t agree to this, it will at least make them pay more attention to any signs of strangers looking for trouble. And regardless of whether you actually have a neighborhood watch or not, you can place a couple of these affordable warning signs around to serve as a deterrent.

6. Place rat traps under the hood

A thief will probably try to steal your car battery at night, and when he lifts the hood, the interior will not be too visible. They might carry a light of some sort, but it’s still necessary to use two hands to remove the battery and carry it. If you place a few sharp rat traps around the car battery the thief could be in for a painful awakening!

This is yet another inexpensive way to harm the bad guys, since you can get an 8 pack of small rat traps for less than $35. These traps also look pretty neutral, and it’s safe to assume that the thief will not see it coming. And you don’t even have to use any cheese!

7. Secure the hood with a security cable and padlock

I’ve honestly never done this, but some people have mentioned this method in passing. If you can secure the hood with a strong security cable and a padlock your car battery will be much safer.

If you manage to secure your hood in this way, even if your window gets smashed and the hood lifted from the inside, the security cable will keep it closed. But before that even happens, there’s a big chance that the thief will switch to an easier target.

8. Take the battery out overnight 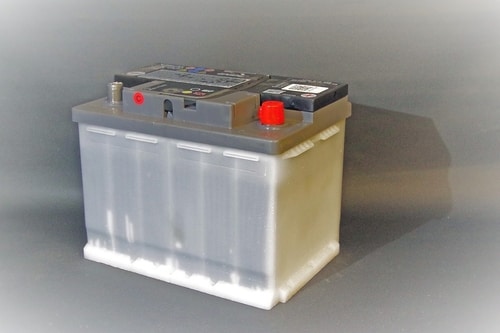 This is a bit of a hassle for sure, but it’s still a good method. If you can remove the battery once you’ve parked your car, you can definitely eliminate the chance of your car being stolen.

However, I imagine it would become annoying very early, so consider it more of a temporary solution until you invest in one or more of the previously mentioned methods.

It’s not all gloom and doom when it comes to securing a car battery. If you utilize a couple of these tips, you can drastically reduce the chances of your battery being stolen.

Keep in mind that thieves always look easier targets that don’t pose a risk of getting caught. If your car stands out with some extra security measure, they’re more likely to switch to a different car, and we know that most people have no idea about car battery theft at all, so there will be easier targets all around. Hope this helps!