Security cameras are everywhere nowadays! I’m actually pretty annoyed by this, as I don’t like being watched by a technological evil eye as I’m walking down the street minding my own business.

But regardless of my personal feelings, there’s a good reason why they’re so prominently used; they’re super effective at deterring criminals from targeting homes and businesses.

Cameras that have a motion sensor can also send an alert to the authorities or the owner if they detect any unusual movement. So like they say: An ounce of prevention is worth billions in cures.

However, there are different cameras available. Cameras can differ based on shape, size, video quality and extra features like night vision and motion sensors and Internet connectivity among others.

You’ve noticed the bullet shaped cameras and the round ones, which resemble a dome. For some reason they often remind me of many Star Wars fans’ favorite droid RT-D2 and… mosques.

Besides their appearance, there are some practical differences that you should take into consideration before purchasing one.

So when you’re buying an outdoor or indoor security camera, which one is the better choice? Let’s dive into the 5 main differences so that you can make the right choice: 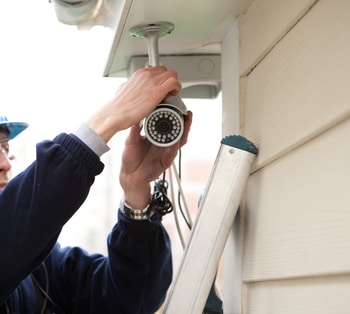 Bullet cameras are easier to install thanks to the mounting handle. After screwing the mounting handle or attaching it in another way (depending on the handle and circumstances) you can easily rotate the camera left, right, up and down. So you can get the perfect view of the area that you wish to monitor.

Dome cameras are also easy to mount, but you have to be more clear about the area you wish to monitor before mounting it. Simply because the mounting handle and the camera are not separate so you can’t move the camera once you’ve mounted in.

So if you want to change the view with a dome camera, you have to dismount it and mount it again to a different position.

However, keep in mind that dome cameras usually provide a wider view, while bullet cameras provide better distance. So for smaller areas and especially smaller indoor areas, a dome camera placed in the corner of the room can potentially cover the entire area without requiring any further adjustments.

Since bullet cameras typically have longer view range than dome cameras, they are better for monitoring larger areas, especially outdoors. Think of the driveway or a larger backyard as the typical locations for bullet cameras.

Dome cameras on the other hand are more convenient for a specific smaller area. For example if you wanted to monitor specifically one entrance point like a front door, a garage door or a sliding glass door, a dome camera could be a more practical choice thanks to having a wider lens but not as long of a range as the bullet camera.

In this case the longer range of view would not be as important, whereas having the extra width would be more beneficial.

Bullet cameras are more easy to spot. Therefore they’re better for deterring criminals who simply don’t want to risk getting caught on camera.

If it doesn’t have motion sensor, your best bet is to place it behind an obstacle like mesh wire or see through plastic/glass, or mount it high on the wall where no one can reach it.

Dome cameras are easier to hide, and even when installed in visible places can sometimes go unnoticed, especially in darker settings. So they’re not as good of a deterrent as a bullet camera.

However, the advantage it has is that you can’t move it out of position as easily. You can’t turn it left or right by using your hand or by standing on top of your fingers and using a stick.

So the simple fact that it can’t be moved out of position as easily as a bullet camera is obviously a benefit. Because the criminal will have to think twice about how they move through the monitored area.

In either case, whether the dome or the bullet camera is better for deterring criminals is hard to tell. Both can be very effective. It depends mainly on the criminal’s experience (or lack thereof) in dealing with security cameras. 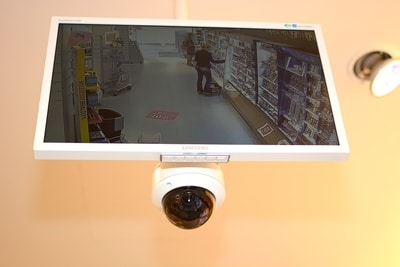 In comparison, a dome look more like a small bump on the wall. That’s why domes are more popular for indoor areas, especially smaller rooms where there isn’t that much space to begin with.

That’s as far as practicality goes. As far as which one looks best I dare not say, for it’s really a matter of personal preference and the general style of the environment you wish to install it in. I personally often find bullet cameras to have more personality, as whacky as that might sound!

Dome cameras are quite resistant to physical damage. That’s because they are covered and protected by a hard plastic. This covering is the things that provides it with a dome-like appearance in the first place.

There are also “vandal proof” dome cameras that are even more resistant to physical harm than regular ones. That’s the type of camera you should get if you plan on mounting it on an easily accessible area like a low ceiling or right next to a door.

Bullet cameras on the other hand are more exposed to physical damage because they’re not protected by any surrounding material. And also because they protrude from the wall, which makes them an easier target.

This is another reason, along with the possibility of being moved out of position, why it’s important to mount a bullet camera out of reach of the criminal. And it’s also why I recommend using a camera with motion sensor and alert feature. So that you’re able to receive an alert as soon as someone starts to mess with the camera.

Other things to consider: 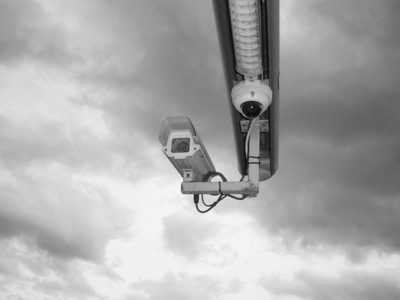 There are some clear practical and aesthetic differences between bullet and dome cameras. They both have their advantages and disadvantages.

If you want the benefits of both cameras, consider using the together. Adjust the bullet camera to monitor longer distance areas, and use a dome camera to monitor the area directly surrounding the camera. If you plan on monitoring a backyard or a parking lot it’s the best way to go. Hope this helps!