I love my new Ford EcoSport, which is why I was constantly worrying about it getting stolen. Especially after reading all the horrible headlines about keyless car theft.

The somewhat sensationalist headlines were indeed backed up with serious statistics; one of them is close to 50% more car thefts in the UK alone over the past 5 years.

I’m not sure about the stats here in the US, but the general consensus is that keyless entry systems are the main reason for this uptick, since they became increasingly popular over the last 5 years and nothing else really changed.

How keyless cars get stolen

You’d expect that keyless would mean safer, but that’s not exactly true. Thieves have found a way to hack the system so that they can open the car in a manner of seconds and without having to make any noise.

This process is also known as relay theft. Here’s how it happens:

The annoying thing is that relay theft can happen at any time and you probably won’t hear a thing. So the thugs will have enough time to drive away and hide the car for good.

What happens to a stolen car 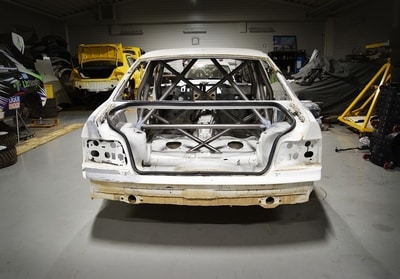 The majority of car thefts that aren’t solved within the first few hours are considered “game overs” by the cops. This is even more true when it comes to relay thefts.

A regular thug will break the window or crack the lock, in either case leaving traces of activity and marks on the vehicle. But relay thefts are done by professionals who have the necessary equipment and a system in place to make a profit off the stolen vehicle. They either ship the cars to Eastern Europe or dissemble them in chop-shops and sell individual parts.

So finding a thug driving your car a month later by accident is not a likely scenario, which means that the ordinary cops on the road won’t be of much help either. Unless they actually crack down on the entire operation and your vehicle hasn’t been shipped yet to Albania or some other remote country in the Balkans.

I found out about the huge risk of this happening only AFTER I got my shiny new EcoSport. As a security geek I knew that there must be a way to prevent myself from becoming a victim of such slimy theft.

Luckily, the car industry started addressing this problem almost immediately. Nowadays there are some keyless systems that are protected against relay attacks, but not all of them by any means. For most of us, there are also a few excellent low tech devices available that protect against all forms of car theft.

After conducting hours of laborious research, I narrowed down the best 7 methods for securing a car from relay theft, and I’m happy to share them with you.

1. Keep your keys away from doors and windows

This is common sense. You don’t want a thief to have an easy time actually stealing the keys and not even having to use a transmitter and an amplifier.

Also, keeping the keys close to thin barriers makes it easier to track down the signal. Especially if the keys are kept on the side of your home that’s closer to the car.

2. Switch off the key signal

If your key has this option you’re in luck. Some keys have this function where you can double press a button or press a combination of buttons to disable the signal. You may want to consult the user manual or the website of your car’s manufacturer to see if your keys have this option or not. 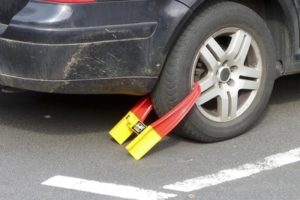 A basic steering wheel lock can do more for your cars safety than advanced locks and devices. Unless the thief is able to cut the tough steel tubes they won’t be able to drive the vehicle. This requires time and effort, and quite a bit of noise as well.

It’s also a powerful deterrent, since most thieves will rather switch to a car that is not secured with a device. And Lord knows that there are many easier targets available.

There are also wheel locks that you can place on one or multiple wheels to prevent them from moving. These are also typically made from tough steel and are very difficult to remove.

More devices equals better security. But no one wants to worry about security to a point where it becomes a major hassle. I’ve narrowed down the top 8 anti-theft devices for cars so you can easily find one or two you like best and be done with it.

A tracker won’t prevent your vehicle from being stolen, but it will increase the chances of retrieving it by close to 50% according to some statistics.

The reason is simple; by having a tracker hidden in your car, you can easily locate your car in real-time which in case of a theft makes retrieving it way easier than if you depended on blind luck and the efforts of the cops. Who by the way will always have more important things to do with their time. Like write speeding tickets, or eat doughnuts.

I recently started using the Vync GPS Tracker (link to Amazon). It’s easy to install and has a simple interface, it costs under $100 and comes with a free 1 year data plan.

5. Place the keys in signal-blocking material

When you’re at home you can block the signal to extent by placing the key in a tin can. It’s not a 100% solution but it definitely breaks up the signal and makes it harder to catch by using a transmitter.

You can also go down the James Bond route and use a signal blocking key case. This is obviously more convenient than a tin can because you can carry your keys in it anywhere you go.

However, make sure that it ACTUALLY blocks the signal. Many are advertised as signal blocking but if you actually try to open the door by pressing the key through the fabric, you will be able to do it.

So once you purchase one, test it out from close-range and long-range and see if it actually blocks or not. I use this key case by Monojoy and I can confirm that it works. On top of that, it’s light, has an elegant design, a very smooth surface and it’s super affordable.

Parking inside your garage instead of the driveway is one way to prevent theft and it doesn’t cost anything. As long as your garage door is properly closed and secured, you won’t have to worry about relay theft nearly as much.

Having said that, make sure that your garage door is actually secure, because many home break-ins happen through the garage door either by “fishing” it open or because it was left open by accident. Check out my garage door security guide to learn more on how to prevent this from happening. 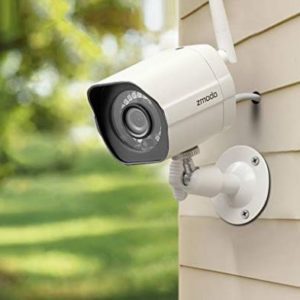 Consider installing an outdoor security camera or floodlights that get triggered by movement. These are a powerful deterrent.

In case of an outdoor camera like Zmodo wireless cam, it will send you a notification on your electronic device if it detects excessive movement in the area.

Then you can check the monitored area through the app which is linked to the camera and see what’s going on. Maybe it’s a man-bear-pig from your early childhood nightmares, or maybe it’s two thieves who failed to notice the camera. Surprise mofos!

Since it has infrared vision, you can easily observe the area at night without having to actually go outside and risk getting hurt. These two devices are excellent for protecting a driveway or a garage door, and for home security in general.

Keyless entry systems are convenient, but they also pose a security risk of relay theft. Fortunately, there are many methods for reducing this risk or eliminating it completely:

All of these tips are simple and free or pretty affordable. I’ve personally invested in a signal-blocking pouch, a tracking device and I also have a steering wheel lock which I use whenever I’m forced to park outside. So far so good!

So I hope you’ll use this knowledge to protect your favorite 4 wheeler as well, because there’s no better cure than prevention.