Yes, car stereos are STILL being stolen every  day all across the country. If you have a stereo from a nice brand that costs a little extra, you’re likely to attract attention from petty thieves.

It would get quite annoying to remove the stereo from the dashboard and carry it with you every time you leave your car. Thieves are aware of this, and are looking for any security weakness on your vehicle which would allow them to break in. When they get in, it only takes 3-5 minutes to remove the stereo and get away with it.

So let’s check out the best, logical tips for protecting your car stereo from the bad guys.

Contents show
How to prevent car stereo theft
1. Check the doors and windows before leaving your car
2. Find a safe parking space
3. Use the stock radio instead
4. Get a car stereo with a removable face
5. Tinted window film
6. Avoid brand stickers and hood ornaments
7. Protect the amplifiers and subwoofers in the trunk area
8. Useful anti-theft car devices
Why are thieves interested in car stereos?
What if your car stereo gets stolen?

How to prevent car stereo theft

1. Check the doors and windows before leaving your car

It’s pretty crazy, but many people leave their vehicles unlocked when they’re not around. Unlocked doors and pulled down windows will make the thieves job so much easier. They will also attract attention from those who would otherwise not even be interested in your car.

During the hot summer days you might want to have some air coming into your car so you might leave the window slightly open. Unfortunately this will make your car more vulnerable as someone could pull a string or a wire through the window and open the door from the inside.

Your best bet is to always keep the doors locked and the windows up. Even when you’re coming back in a few minutes, because that’s exactly how little time it takes to remove a car stereo and get away with it. 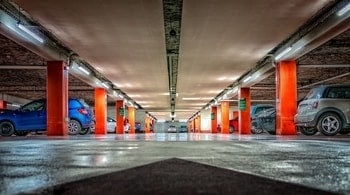 Where you park is extremely important to preventing stereo theft. When parking at home, it’s best to park indoors if you have a garage. If not, try to park as close as you can to your home. If the alarm goes off or someone tries to smash the window you will have a greater chance of hearing it happen.

When it comes to parking in public, choose well-lit areas with a lot of passerby traffic. Security cameras and on-site security guards are a great addition as well. And vice-versa, try not to park in dark, isolated areas where it’s easy to break into a vehicle without anyone noticing.

But often we can’t be picky about where we park. A dark corner of an enclosed parking lot is not necessarily a bad choice if there is no nearby escape route. This factor will make any thief think twice before getting down to business.

3. Use the stock radio instead

Stock radios are not as expensive and they’re much harder to resell. Mainly because stock radios are designed for some vehicles, and will not fit in others. So thieves are usually not interested in them at all. The problem is that the original stock radio doesn’t have high sound quality.

So it’s ultimately your personal choice whether you are okay with the sound quality. Or you’re willing to invest in a better car stereo which will involve taking some extra security measures to protect it.

4. Get a car stereo with a removable face

If you have a stereo with removable face (front panel), you can take it with you anytime you leave the car. No thief will be interested in stealing only half of a car stereo. Especially when they don’t know if it’s worth anything or not.

This BOSS Audio 632UAB Car Stereo is a good example of a stereo with a detachable panel and it’s very popular with over 2000 reviews on Amazon.

The easiest way to deter thieves from your vehicle is by not allowing them to look through the window. If they don’t know what’s inside, why would they take the risk of getting caught over nothing? Unless you’re driving a really expensive car, chances are that they will move to a more transparent target.

Tinted window film is used for this purpose. It’s really simple to install and very affordable. It uses a static cling so all you need to do is press it on the window. Then cut with a knife or scissors any leftover parts of the film so that it fits nicely.

If you want the film to be perfectly designed for your window, I suggest ordering from LEXEN Computer Pre-Cut Window Film option on Amazon. If you check the product page, you will see that it’s possible to order the right dimensions for different cars. Find your car through the search option (upper left corner) and you won’t have to do any extra trimming. You can also customize the tint shade, with different percentage options.

If you have a nice stereo by Kenwood, Sony or any other large brand, you might be tempted to place a brand logo sticker or ornament on your car. But think about it; who is more interested in your stereo, the imaginary hot girl in the parking lot or the very real thief snooping for trouble?

Any extra exposure will attract bad attention. Thieves are aware that it’s the people with expensive toys who place brand stickers, not those with cheap toys. They WILL act accordingly.

7. Protect the amplifiers and subwoofers in the trunk area

Amplifiers and subwoofers can be placed in the trunk to improve bass noise and prevent rattling sounds. Mainly because the trunk has enough space for the sound waves to move and bounce back without rattling doors and windows.

However, they can also attract undue attention, especially if you own a truck. It’s best to cover the trunk with a tonneau cover. Aside from protecting against theft, the cover will also protect the electronic circuits from sunlight and heat.

Some trunk can also be easily opened without a key by manipulating the keyhole with a modified screwdriver. When parking your car overnight, unplug the cable socket to prevent this from happening.

There are many devices designed to prevent car break-ins:

Having an alarm and/or a camera can be useful because you will be alarmed in case anyone messes with your vehicle. Some of these devices will just go off and produce annoying sound, but others can also send you a notification on your electronic device in case they spot any movement or vibration on your vehicle.

Security window film makes it more difficult to smash the car window because it keeps the glass shards in place. Finally, improved door locks will prevent thieves from manipulating the keyhole. Especially if your car has a keyless locking system.

If you’re interested in any of these solutions, check out my in-depth guide for best anti-theft car devices.

Car stereos are small and can be removed from the dashboard in a couple of minutes without making any noise. Especially by a thief who specializes in stealing them. Specialty car stereos be easily sold for a hefty price and there are many resale markets available.

What if your car stereo gets stolen?

With hundreds of resale markets available, it’s become increasingly difficult to trace a stolen car stereo. A thief could end up placing it on Craigslist and similar websites. or sell it to a friend or a relative.

Calling police and reporting the theft is definitely recommended. But don’t expect too much action on the part of authorities, unless it’s a really expensive stereo or there was further damage done to your vehicle.

Police will more often than not treat car stereo theft in a similar way they would treat an average-priced bike theft. If it pops up somewhere they’ll do their job to retrieve it, but they probably won’t turn it into a full-blown investigation.

Ultimately, your best bet is to prevent car stereo theft from happening in the first place. I hope the before mentioned tips will help you do that successfully.

Chief editor of Security Latest with vast experience in the security industry. I'm also a family man. When I'm not turning homes into fortresses, the Klapan family is usually on the Nintendo or on one of our local hiking trails.