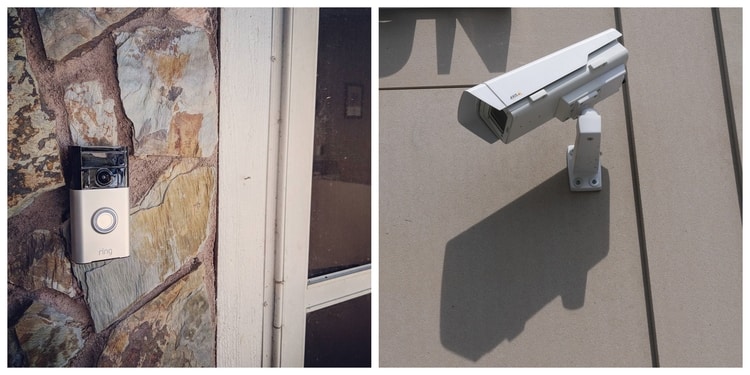 Monitoring the entrance points of your home or office (doors and windows) is one of the best things you can do for improving overall security.

But you might be wondering if it’s better to use a doorbell or a traditional security camera to get the job done. In this article we’ll analyze the 5 main differences so that you can make a more educated decision.

A security camera offers more choices when it comes to location. Video doorbell can usually only be placed close to the door. But a camera can be placed anywhere and pointed at the door and the surrounding area. This makes it a more versatile choice. Especially if you opt for a wireless security camera. You could even hide it on a tree where no one can see it.

Because you can place security camera in different locations you can also make it less vulnerable, by placing it behind steel bars or on a higher spot where it’s hard to reach.

In comparison, a video doorbell is typically installed next to the door where anyone can tinker with it, by either smashing it or placing a sticker or something else over it to prevent it from filming them.

A video doorbell lens is focused on the area right in front of the door. You can’t do much else with it. And once you’ve installed it, you won’t be too keen to remove it, ever.

Security cameras are easier to transition from one place to the next. If you get a bullet camera instead of a dome camera, you can play with the angle as well to focus on different areas at any time.

Video doorbells are smaller than your typical outdoor security camera. And to be frank, security cameras often look ugly, or they make the place seem a bit overly protected and the owner a bit paranoid, especially if there’s multiple cameras installed.

Video doorbells on the other hand are very convenient because they’re barely noticeable. And most of them look very nice, like the Ring Video Doorbell (link to Amazon) which is the most popular one by far.

While these 4 differences are significant for some people, it’s also worth pointing out that there are many similarities between these two products if you get products of similar quality. Both with newer security cameras and doorbells you can expect these features:

For securing a door bot a security camera and a doorbell can work just fine. Some people prefer a camera because they like the extra versatility. If you live in a house perhaps you have a larger area to monitor and the greater length provided by a camera lens can come in handy.

For those who live in an apartment, a video doorbell is often a more convenient choice, especially in a hallway that’s shared with neighbors. Having a large security camera installed in a building does look a bit awkward and would probably annoy the neighbors.

So take these differences into consideration when making a choice between buying a camera or a doorbell and I’m sure you’ll make the right choice for your situation. Hope this helps!