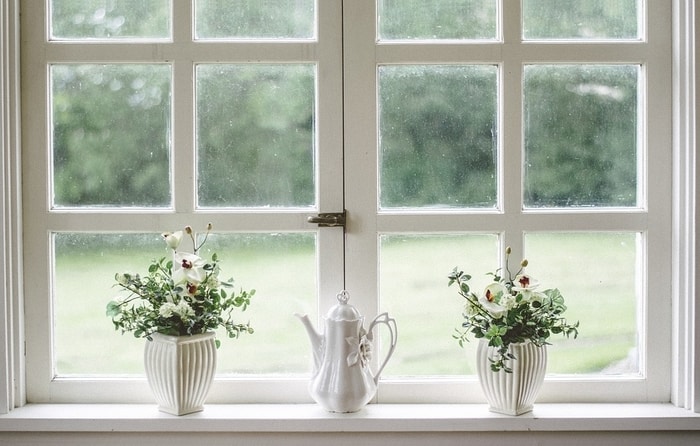 Living in a ground floor apartment can be tricky when it comes to security. Besides securing the front door, windows are another large entrance point that intruders can use to break in. Ground floor windows are of course a security concern for house owners as well.

Imagine being woken up in the middle of the night by a sound of shattering glass, and then seeing a shadowy figure move around your furniture. It’s definitely not my idea of a good time, but it’s unfortunately one of the more common security threats with unprotected ground floor apartments.

Luckily, there are many simple and affordable security measures you can take without even contacting a professional security service:

Locking the window is a must-do, and installing better locks is also recommended. But intruders can break through regular glass, so installing difficult-to-break glass panels or security window film can add extra protection. Other methods include installing bars on the window, using motion detectors with floodlights and planting thorny bushes to make it harder for intruders to approach the window. If you’re really serious about it, you could also install a camera with night vision and a motion detector alarm.

These are the exact methods I’ll share with you in this article, so keep reading to learn more about them.

Locking the window is the first step to securing it. Even if you installed cameras and motion detectors and made it Mission Impossible to break in, if you keep the window unlocked it’s only a matter of time before a Braveheart burglar decides to give it a try.

Contrary to popular belief, most intruders aren’t exactly technical wizards. They most often come in through unlocked doors and windows, especially during hot summer nights when people are willing to risk security for some fresh air.

The second most popular tactic is sheer force. While your regular lock is better than nothing, it probably wouldn’t hold well against forced entry. Installing an additional lock AND of a different type can make it way harder to break in because if one falters, the other will keep the window in place.

This is a great extra-security lock from Amazon for sliding doors and windows, regardless of whether they’re horizontal or vertical. It’s made out of aluminum, wood and vinyl, so it’s both tough and it looks pretty nice. There are also 3 different colors to choose from depending on the color of your window.

Another great product for sliding windows is the Burglarbar, which prevents the sliding sections of the window/sliding glass door from opening. It’s really affordable and convenient since no tools are required for installation.

Reinforcing glass windows requires replacing the traditional glass with the type that is more difficult to break. There are a couple of options to choose from:

Either way, all of these options are more expensive than traditional glass. And replacing glass is not exactly a DIY project.

Most readers will be better off by using basic security window film instead. This is a highly adhesive material that you stick on glass panels. If someone tries to break the glass, the window film will absorb the impact and keep the shards of broken glass in place. I recommend getting this 8 mil thick clear window film from Amazon that works exactly like that.

The intruder will then have to keep hitting the window, and the noise will potentially alarm someone of the break-in attempt.

You can use window security film on any glass surface, including glass doors and glass shower cabins. So consider using one of these window-reinforcing options that you feel is most convenient for you in terms of price and installation.

5. Mount metal grills on the window Grills make it impossible to enter through a window, even if the intruder smashes the glass. They will have to cut through the grills first, which would take a lot of time, effort and noise, three things that burglars are not willing to compromise on.

Before purchasing grills, make sure to measure the window first. The grills should be slightly bigger then the window in order to mount them properly. For security purposes they should ideally be dense enough that you can’t put your hand through them entirely.

If you have some garden space by the window, you could make the most of it by planting thorny bushes.

Burglars look for the easiest entrance points, and if there’s a chance of injury before they’ve even entered your home, they’ll probably avoid it altogether.

Here are 4 thorny plants that you can plant for this purpose, that also look pretty cool:

Creeping Juniper – This bush is also known as ‘Blue Rug’ because it has long branches and it kinda looks like a flattened blue carpet. It has a thorny stem and foliage. It’s pretty hard to get around it as well.

Common Holly – If you want an evergreen shrub with dark green spiked leaves this is the one. Female plants will also produce large red berries. Common Holly can be planted in any well drained soil. It’s recommended to use garden compost and bone-meal.

Giant Rhubarb – This shrubbery has abrasive foliage and can grow up to 2.5 m high. It’s also recommended by the UK police for securing windows.

7. Use a window alarm with vibration sensors

Instead of fortifying your window with reinforced glass, you could instead use an affordable window alarm. These alarms will produce a loud, irritating noise if any significant vibration is produced on the window, for example if someone tries to smash it. This will alert you and the neighbors around you.

Window alarms are not that expensive. You can get one or two solid alarms for less than $20. A very popular and affordable window alarm is made by Doberman Security, and it has over 1100 reviews on Amazon.

It’s vibration sensitive and produces 100 dB noise when triggered. But it’s also designed to not be triggered by wind, rain and other common occurrences, which eliminates the chance of false alarms.

The best part about it is the easy installation. This alarm is self-adhesive on the backside, so all you need to do is peel off the protective layer and stick it on the window. No tools required. It can be used to protect any type of windows.

A security camera can have two purposes. If you place it on a visible spot, it will scare away burglars who’re afraid of being caught on video. Because if the police manage to reveal their identity through the footage, they’re done.

So even if a break-in takes place, you will have the footage to show to the authorities, which can make their job far easier.

Since most break-ins happen at night, I highly recommend getting a security camera with night vision and sharp video quality. Many new security cameras also have a motion detector and WiFi connectivity.

With a motion detector camera you can receive alerts directly on your phone or computer in case of any strange movement. This can allow you to react immediately by calling authorities and getting ready to defend yourself and your property.

Also make sure that it’s an outdoor camera, so that it can withstand harsh temperatures, rain, wind etc. Outdoor cameras also have a less sensitive motion detector than indoor cameras. This reduces the chance of false alerts for example if a bird flies by or a branch falls off from a tree.

The price of home security cameras can range anywhere from $30 to $200. My top recommendation is the Zmodo Outdoor Security Camera (check reviews on Amazon) because it fits all of the criteria and is pretty affordable at around $50.

The setup is straightforward: it requires only one cable and it comes together with the camera. However you might need to use an extension cord, depending on the location of your nearest power outlet.

Floodlights as the name says will flood any area with light when someone approaches it. So for example, a burglar could be approaching the window and then a light turns on.

Since every intruder prefers to work in the cover of darkness this is a good deterrent. It can also make them think that someone is awake and could easily spot them.

How effective are floodlights? That depends on the location of your property. It doesn’t make it harder to break-in so it’s value is only in raising the risk for the intruder in case someone is at home or there are neighbors or a lot of traffic nearby.

If your property is vacant and in the middle of nowhere it won’t do much good because the intruder will not have to worry about being seen in the first place. So it really depends on the situation. Burglars hate dogs, because a dog can both alert others of their presence AND attack them at the same time.

In a recent survey, 34% of convicted burglars said that a dog inside would change their mind before breaking into a home.

And it’s a safe bet that if they knew it was a German shepherd or a pit bull, the percentage would be even higher.

From the gathered DIY window security tips, we can recognize three different tactics:

I suggest using all three tactics for maximum security, by implementing one method from each tactic. This will ensure that anyone who tries to break-in through your ground-floor window(s) will look as dumb as the intruders from Home Alone movies, as they get stopped by a serious obstacle every step of the way.